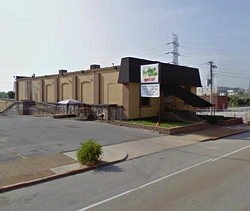 Police estimate 150 people were inside Red 7 at the time of Saturday's bust.
The PBS history series, American Experience, recently aired a documentary on the Stonewall Uprising. You know that story, don't you?

In June 1969, New York City police attempted to shut down the Stonewall Bar in Greenwich Village. It was customary then for the police to raid such bars in an effort to harass and embarrass the gay clientele inside. But at Stonewall, the gays fought back. Riots broke out for days, eventually leading to changes in New York's discriminatory laws against homosexuals.

I couldn't help thinking about Stonewall this morning when I read how police recently cracked down on a south St. Louis swingers club. Three cops and a liquor control agent posed as male-female couples on Saturday and ventured into the Red 7 at 8658 Broadway.

The club was hosting a party that night for St. Louis Adult Connections, a social club that describes itself as an "adult group for committed lifestyle friendly couples and ladies 21 and over." Apparently, Red 7 had hosted the group numerous times -- and someone tipped off the cops.

As the Post-Dispatch chronicles today, once inside the bar, the undercover officers saw "women with their shirts unbuttoned and clothing removed, couples openly fondling each other and groups having oral sex." The cops called in their findings to a police lieutenant who sent in the blue shirts.

An estimated 150 people were in attendance. Two people -- a patron and one of the bar's co-owners, Alen Prohic -- were ticketed for permitting lewd or indecent conduct or entertainment in a licensed liquor establishment. It's unclear whether the other owner, Jeffrey Koenigs, was there Saturday.

"It's sort of like raves used to be," said Liquor Commissioner Bob Kraiberg, in explaining the bust. "If you're not watching the swinger pages, you're not going to know about it."

Which is exactly my point. Who were these swingers harming on Saturday night? And would anyone outside of their community have known about this if the police hadn't conducted their raid? Lastly, in a city plagued by legitimate crime, is busting consenting adults really the best use of our law enforcement resources?

An interesting aside: Red 7 has gone through numerous name changes over the years, including "Rock Star" and "The All New Tequila Wild." In the mid-2000s the bar -- located near the River Des Peres -- was called "Rock Island" and managed by Randy Greenman.

Greenman hired his friend George Whitter to work the door of the club. In September 2007 Greenman and Whitter disappeared after leaving another nightclub in south St. Louis County. Their bodies would be found months later scattered about Jefferson and St. Charles counties. Last August, St. Louis County prosecutors indicted five members of a motorcycle gang with their murders. Authorities say Greenman had been trafficking drugs on behalf of the Invaders bike gang before running afoul of the group.