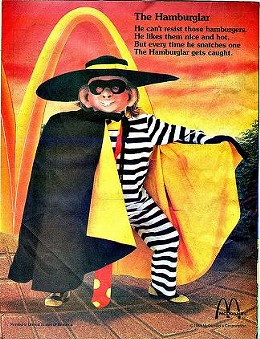 Because we couldn't find an image of a "Pizza Burglar." Besides, we like how the McDonald's arches looks like the Gateway Arch in this image.
Two suspects were arrested and one of them shot after St. Louis police officers responded to three attempted robberies of pizza-delivery drivers in south city.

St. Louis police give the following account of the shooting that led to the arrests...

Shortly before 11 p.m. a pizza-delivery driver was robbed while attempting to deliver pizzas to the 4600 block of Michigan. The driver knocked on a door and no one answered. As he was leaving two men in ski-masks confronted him at gunpoint, stole the pizza and his wallet and fled to a nearby alley where a third suspect was waiting in a vehicle.

A similar crime played out around 8:40 p.m. in the 4100 block of Minnesota, only in that case the robbers fled empty handed after a homeowner opened a door to see what was going on.

After the 11 p.m. robbery, police notified pizza chains of the situation and discovered that an Imo's location had just received an order from the same phone number used for the robbery on Michigan.

Police advised Imo's not to make the delivery and instead sent officers to the address in the 4100 block of Taft. Suspecting that a getaway driver might be waiting off the street, the cops went to the rear of the home and saw a van parked in the middle of the alley.

The entrance to the alley in the 4100 block of Taft.
The officers got out of their unmarked car and walked up to the vehicle. After seeing the officers, (who wore vests with the word POLICE on the front and back) the suspect in the van drove toward the patrolmen. Fearing for their safety, both officers fired their weapons. The van then struck the officers' vehicle pushing it several yards until it hit a dumpster. The vehicle then struck a garage and came to rest.

A 16-year-old black male suspect then got out of the van and pointed what appeared to be a gun at the officers. One of the cops -- described as a 43-year-old with a dozen years experience in the department -- fired at the teen again. The suspect ran from the scene but was later taken into custody. He was taken to an area hospital where he was treated and released before being taken to the juvenile building.

During a canvass for the other suspects in the previous robbery, a second man was arrested. He's described as a 23-year-old black male. Police say they found a gun in the nearby 4200 block of Ellenwood and an air pistol in a yard in the 4400 block of Taft.

As is the case in all officer-involved shootings, the officers -- both white males in their 40s with more than 12 years experience on the force -- have been placed on administrative leave. The investigation is ongoing.