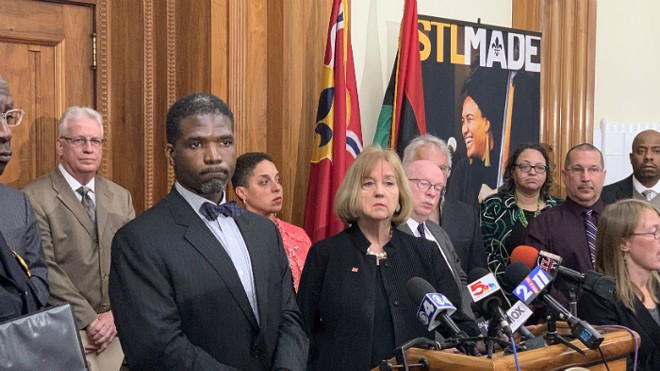 Update, 8:57 p.m.: Dr. Fredrick Echols is getting a new title. He'll be the "acting" health director. Aldermen and the city counselor discussed that some municipalities had found a little wiggle room for required qualifications by designating people as "acting."

“In light of the City Counselor’s recent strict view of the City Charter, Mayor Lyda Krewson, Chairman of the Board of Health & Hospitals Dr. Will Ross, and Dr. Fredrick Echols believe it is in the best interest of St. Louis to amend Dr. Echols’ appointment to that of Acting Director of the Department of Health, so as not to allow this continued distraction from the mission and ongoing operation of the Department during this worldwide COVID-19 pandemic.

Our interest is in committing our limited time and resources solely to the health and safety of residents and our continued response to COVID-19."

The original story continues below:

The man leading St. Louis' response to coronavirus isn't "quite there" in meeting the required qualifications for his position, the city's attorney says.

"I think he’s very close to those qualifications, but I say with great regret, I don’t think he’s quite there based on what I know of his biography," Bush said.

The missing qualification? Echols is no longer a licensed physician in Missouri. That surprising fact surfaced as an issue earlier this month through a lawsuit challenging the city's plans to evict people from a homeless camp in downtown parks. Echols testified at a federal court hearing on the public interest law firm ArchCity Defenders' request for a temporary restraining order to block the city from clearing out the tents.

Echols testified that he was a licensed doctor during what would normally be a routine establishment of credentials, but city attorneys later informed the judge that Echols' license had lapsed. The St. Louis Post-Dispatch reported when he was hired that he wasn't licensed to practice medicine in Missouri.

A federal judge ruled in favor of the city in rejecting the restraining order, and ArchCity ultimately dismissed the suit after the camps were removed. But the questions about Echols' license have lingered. During a joint meeting of the Engrossment, Rules, Resolutions and Credentials Committee and Health and Human Services Committee, Alderwoman Christine Ingrassia asked Bush for his opinion on the health director's qualifications.

"I have to say, very regretfully, because I think he’s done a splendid job as director of health and hospitals, I think he almost satisfies those requirements, but he’s not quite there," Bush answered. "I say that with great regret, because I’ve spent a lot of time with Dr. Echols these last couple months and [I'm] really honored to have worked with him. He’s been dedicated, intelligent. He’s used great common sense, he’s been brave, and he’s acted with great integrity. I have nothing but admiration for him and the job that he’s done in his position. I think he's served the people of St. Louis almost heroically, indefatigably for sure."

The meeting was conducted via video conference, and Echols sat stoically as Bush spoke. Ingrassia said she was "very troubled" by Echols' errant statement during the court hearing, and she pressed Bush about what would qualify as perjury.

Bush said he thought Echols made a mistake while testifying and did not intentionally mislead the court.

"Mistakes are not perjury," Bush said, adding, "I am confident in my heart there was no deliberate misstatement."

What happens next isn't clear. Mayor Lyda Krewson, who appointed Echols, has been a staunch supporter. In a letter sent on Wednesday to the Board of Aldermen, Krewson points out there are various ways to qualify for the position, including holding a masters in public health. She argues that Echols' experience is actually "far superior" to the minimum standards.

"Some seek to discredit this highly qualified physician, it is unclear what their motive is," Krewson writes. "There is no doubt that Dr. Echols is qualified to serve as director."

Echols has had an impressive career, including serving as a Navy physician and the chief of communicable diseases for the Illinois Department of Health during the Ebola crisis before Krewson appointed him in 2019.

Publicly reserved and serious in demeanor, Echols has been a regular presence as the city sought to slow the spread of the virus. In an April op-ed in the St. Louis American, he warned that the city’s black residents were being hit particularly hard, revealing for the first time that the first twelve people to die of COVID-19 in the city were African Americans.

"I hope Dr. Echols will continue to serve as Director of Health & Hospitals in spite of these personal attacks," Krewson writes. "We need his professional skills and credentials now more than ever."