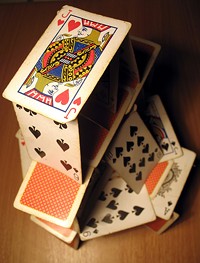 flickr.com/photos/houseofcards
Hartmann's housing gamble lost millions for investors.
Doug Hartmann got the maximum sentence possible yesterday when a federal judge ordered him to serve two years in prison and pay $34 million in restitution to some 114 victims.

Earlier this decade, Hartmann was one of the most free-spending developers in town -- buying up hundreds of properties (mostly in south St. Louis) that he told investors he planned to rehab and sell for substantial profits.

But for many investors, the promised riches never came because Hartmann, 47, quit rehabbing the properties he purchased. Instead, he recruited additional investors to buy new properties or -- as was often the case -- invest in a property that was actually owned by an earlier investor in Hartmann's company, DHP Investments.

Hartmann would then take the money from these new investors and use it to show bogus profits to earlier investors. Along the way, Hartmann's pyramid scheme clouded the titles of dozens of properties, leaving their ownership in question.

"His fraud caused serious harm to individual investors and banks, and one of his victims even lost her house," states Acting United States Attorney Michael W. Reap. "On top of that, a number of city neighborhoods have been left with boarded up homes and foreclosure signs. In many ways this activity destroys these city neighborhoods. Hartmann deserves this sentence."

Hartmann was first indicted in 2007 on charges bank and mail fraud that carried a possible sentence of 40 years in prison. But under a sweetheart of a plea agreement reached this past April, the maximum amount of time Hartmann could serve behind bars was reduced to just two years.

Not mentioned in the indictment or plea agreement is the name of Hartmann's one-time attorney Lisa Krempasky, who many accuse of playing an instrumental role in deceiving investors. For an account of how Krempasky and Hartmann allegedly worked together, check out this RFT feature story.