Despite the cold, $458 million CITYPARK stadium was packed with fans — and they were loud Benjamin Simon
A fan gets the crowd riled up before their procession to CITYPARK stadium.

Don’t tell St. Louis this soccer game didn’t mean anything. Don’t tell that to Patrick Koetting, who drove two hours from Cape Girardeau, or Sam Wise, who took a half-day off work and started tailgating at 11:30 a.m., or the guy who ran up to Wise and yelled, “This is fucking awesome, Sam!”

Don’t tell that to the St. Louligans fan club. They’ve attended every St. Louis professional soccer game since 2010, as the city rotated through a list of soccer teams, from AC St. Louis to St. Louis FC to CITY SC 2. They’ve been waiting for an MLS team and a stadium to call their own.

The MLS team will have to wait until 2023. But on Wednesday, St. Louis CITY hosted its first game at CITYPARK stadium in Downtown West, a game between CITY SC 2 and Bayer 04 Leverkusen, a German Bundesliga team. It was the first time the public saw the highly advertised 22,500-seat, $458 million stadium, with the steepest Supporter Section in MLS and food only from St. Louis vendors. Benjamin Simon
St. Louligans gather outside of Schlafly's before marching to CITYPARK stadium.

Don’t tell the fans, though, that they were headed to see a friendly match –– a scrimmage, a glorified practice game. Leverkusen didn’t play their best lineup. CITY SC 2 subbed in a 16-year-old on their academy team. Don’t tell them that. Because the fan club still organized a tailgate outside of Schlafly Tap Room that was supposed to start at 4 p.m. but really started hours before.

At 6 p.m., an hour before the game, hundreds of fans paraded down North 22nd street toward the stadium. They marched with flags, waving banners, banging drums, wearing flamingo hats, wrapping themselves in CITY SC scarves and covering themselves in red. “St. Louis is wonderful!” they chanted. “It’s the home of toasted ravioli! St. Louis is wonderful!” Don’t tell Sarah Totten that it was 30 degrees outside, either. It was cold. Really cold. See-your-own-breath-type cold. Can’t-feel-your-toes-type cold. It was windy and, at times, downright miserable. Totten knew it. Her legs were numb, she said, as she stood at the tailgate in front of Schlafly. But she didn’t care. She had taken the Metro from Granite City. She had been tailgating since 2 p.m.. She was here to celebrate. She had waited long enough for a soccer team. Don’t tell Ray Carpenter that this was just another soccer game. He helped build the stadium. For the last two years, he has done civil engineering work every day at CITYPARK. He isn’t a soccer fan. But he bought tickets. He overlooked the pitch on Wednesday evening, his partner by his side, marveling at the crowd, the turf, the red lights –– the place he has reported to work over the past two years, the place he helped to construct.

Don’t tell Gene Poisson that he shouldn’t be excited about an exhibition match. He showed up at the game in his “World Cup” outfit — an American-flag-themed suit and an American-themed cowboy hat, with a St. Louis CITY jersey and scarf. Oh, and under the suit, jersey and scarf, he wore a t-shirt that reads “Saint Fuckin Louis.”

“It’s a fantastic fucking environment,” he says of the stadium. He has season tickets and he can’t wait for 2023. “I’ll be one of them dudes in the club suites jumping up and down like a fool.” Benjamin Simon
Gene Poisson (left) brought out his "World Cup outfit" for the first game at CITYPARK stadium as he stands with Rob Houston.

Don’t tell the elevator that no one cared — it broke from overuse. Or the concourse hallway that was so packed with people at halftime, you, quite literally, could not move.

Don’t tell Brad Kalish that he should have put his kids to sleep. Forget the late bedtime and the cold weather. Kalish brought his whole family to the game. “I’m crazy,” he admits. But, he says, “it’s history.” The kids tried every single concession stand, he says. More importantly, they can say they witnessed history. 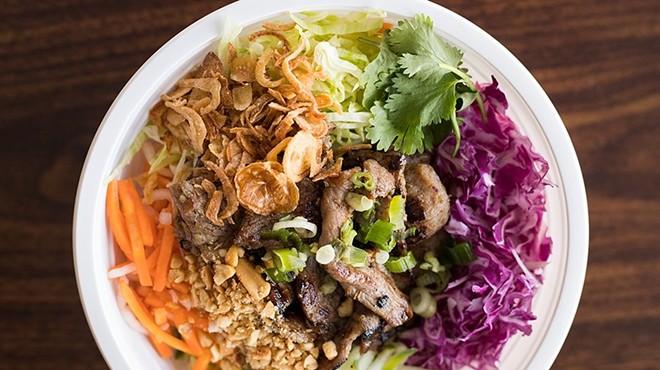 Don’t tell the fans that their team was down 3-0 in the final minute, that the game was never very close and they had no chance to come back. As St. Louis City SC 2 lined up for a corner kick, one minute left in the game, the stadium rocked with noise so loud that someone in the red-and-blue Ferris wheel glowing in the distance at Union Station could have heard them.

Don’t tell City SC defender Joshua Yaro that the night was defined by the loss. “We’ve seen it empty,” he says of CITYPARK stadium. “And just seeing the stadium full with the excitement and with the fans and having everyone around –– yes, [we lost], but the moment itself is huge.”

Don’t tell coaching director John Hackworth that St. Louis isn’t a soccer city either. “I’ve said it a lot,” he said of the history and talented players in the city. “This is the best city in the country for soccer.” Benjamin Simon
The first view of CITYPARK Stadium when walking into the stadium before the game.