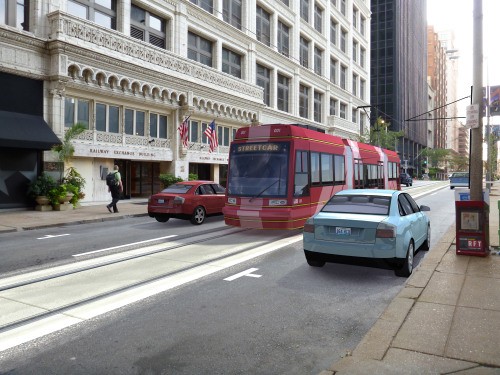 St. Louis took longer than most cities to abandon the streetcar, finally choosing buses and cars over trams in 1966.

But streetcars are making a comeback, and we don't just mean in the Loop. As more people move into cities and look for public-transit options, Kansas City, Seattle, San Antonio, Portland, Atlanta and Detroit have all recently launched streetcar projects.

Now, organizers are working to bring a modern streetcar line to the city of St. Louis, connecting the Central West End, midtown and downtown along the central corridor and extending up into old north city. 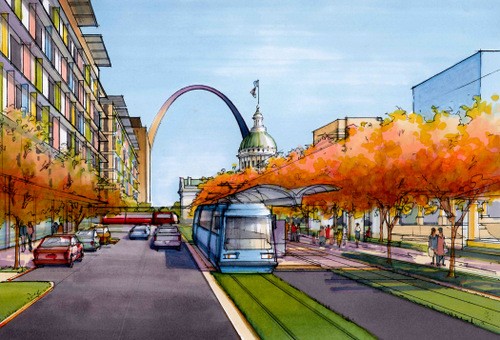 Downtown STL
Here's what the St. Louis Streetcar could look like downtown.

A new trolley line doesn't come cheap; the Partnership for Downtown St. Louis released a feasibility study estimating the capital cost of building a street car at between $218 million and $271 million, depending on streetscaping.

Craig Heller, president of the St. Louis Streetcar Company, says organizers are looking for federal dollars to finance most of the project, which means rounds of studies and impact statements before breaking ground.

"If you want to get this thing built and get it done with the help of the federal government's money, you have to follow this step first, have a study," Heller tells Daily RFT. "Then you can apply for the real dollars to actually build the thing. You can't just walk in and say, 'Hey, we're going to do this thing. We need $100 million of your money.'"

Heller says organizers are fundraising for a $1 million environmental-impact report to investigate the social, economic, environmental and engineering impacts of the streetcar on the city.

"We're waiting to hear when federal dollars might be becoming available and working locally to raise dollars for that match," Heller says.

The idea for the city streetcar came when Saint Louis University moved its law school from midtown to downtown, according to Railway Age Magazine. What started as a discussion about shuttle buses for SLU students evolved into an idea for a city-wide tram.

The five-mile, east-west track would run through the middle of downtown's Kiener Plaza, along Olive Street and Lindell Boulevard through Grand Center and to the Central West End MetroLink station. Another two miles of track will run north from downtown along 14th Street and North Florissant Avenue to St. Louis Avenue. 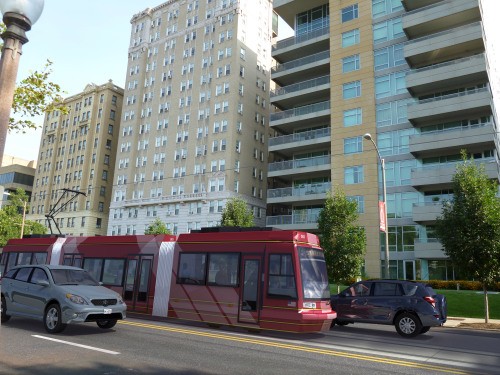 Downtown STL
A future view of the Central West End?

St. Louis' other big trolley project, the Loop Trolley, has been fraught with delays and lawsuits, but Heller says he's not too concerned his project will face the same hiccups.

"The Loop Trolley is a little different than our effort," he says. "We have a really good dialogue with the Federal Transit Authority. They know it is a very sound project from a financial standpoint and from the ridership numbers. The important thing at this point is to make sure our efforts are closely aligned or in sync with how they like to see things done."

Heller says there's no clear timetable for this project, but the feasibility study names 2018 as a possible opening date.