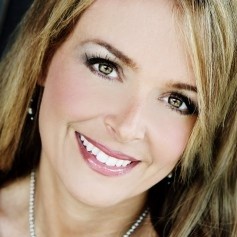 Gina Loudon was there at the foot of the Gateway Arch when the St. Louis Tea Party held its first demonstration back in February 2009. She went on to gain national fame for organizing a Buycott of Arizona products in support of the state's controversial immigration laws. She even got her own radio show as "Dr. Gina Loudon.".

And now the good doctor (she apparently has a PhD in a "psychologically related field") has landed a gig on reality TV. Because, let's face it, what else is there for Loudon to accomplish? That's right television fans, set your DVR to ABC tonight when Loudon trades places with a free-lovin' woman in Wife Swap.

Yep, it's about to get real uncomfortable in the conservative Loudon house, which, btw, is no longer in St. Louis. Gina and her husband, former Missouri State Senator John Loudon, now call San Diego home.

In tonight's episode of Wife Swap, Loudon trades places with the wife of a semi-professional wrestler from New York who shares a live-in girlfriend with his wife. Kinky!!! The following recap comes courtesy of tv.broadwayworld.com:

When Gina first arrives in Charleston, she meets Ashley (the girlfriend) and learns that she'll be living with a polyamorous couple. With her conservative views and strong religious convictions, Gina finds the relationship "wrong" and is very uncomfortable with the situation. Tensions rise between Gina and Chris after he and Ashley take Gina out one night for drinks at a local bar. With the alcohol flowing, Gina begins to let her guard down and starts sharing her true feelings about the relationship between Chris, Angela and Ashley, as well as her stance on myriad controversial topics. The evening peaks Chris' interest to look into Gina's background -- and what he finds prompts Chris to confront her, sparking an even larger confrontation.