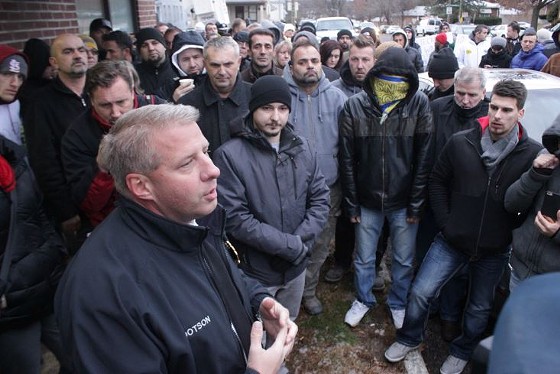 Three of the teens were in police custody Monday night; two are juveniles, aged fifteen and sixteen, and seventeen-year-old Robert Joseph Mitchell, who lives on Winnebago Street just a few miles from the crime scene, has already been charged for first-degree murder and armed criminal action.

"You have my commitment: We will make sure we arrest the fourth person," said St. Louis Metropolitan Police Chief Sam Dotson to a crowd of grieving supporters and residents of the Bevo Mill neighborhood Monday evening. Dotson repeated his reassurance from Sunday night -- the attack does not appear racially motivated. 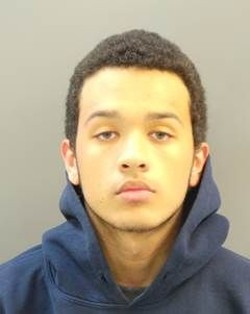 According to the probable cause report, the four teens yelled at Begic, his fiancee and two others while they were getting into Begic's car, and as he drove away one of the teens leaped onto the vehicle's rear and began bashing at it. Begic stopped the car and exited, and the group's members challenged him to fight before beating him to the ground with hammer blows.

Speaking to the crowd, Dotson promised an increased police presence in the community.

"Police officers have been very busy doing their job, away from the neighborhoods. I want to get them back into the neighborhoods, and we started doing that today," Dotson said, addressing concerns that his officers are spread too thin between their city responsibilities and handling Ferguson-inspired protests. He said that additional foot patrols would be added to the Bevo Mills area, and that his department will hire more Bosnian officers.

Dotson's made his remarks before a growing crowd of supporters outside a graphics shop on Gravois Avenue, about a mile and a half from where Begic was killed. Here, the Bosnian community paid respects to another lost member, Denis Nasic, a well-liked local DJ whose body was found Sunday at the bottom of a cliff in Cliff Cave Park. (Police told KSDK (Channel 5) that they suspect no foul play in Nasic's death.)

While Dotson's words appeared to calm some tensions in the audience, others, like Aldi Jance, who wore a white T-shirt with "Stop the Killing" on it, said the attack on Begic has inflamed the community's existing fear of violence and crime.

"He could say they're going to bring out police officers, and they could bring out the army, but crimes will never stop, OK?" said Jance, who immigrated from Albania as a child. "What the officers got to do is look at the higher risks, the murderers, the killings, the big things instead of the little things, and maybe something will stop around here." 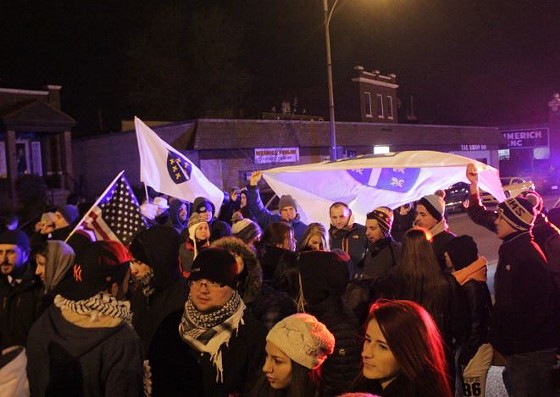 Danny Wicentowski
The Bosnian community and their supporters marched along Gravois Avenue to demand greater police action against crime.

Around 5:15 p.m., the crowd, now numbering around 300 and escorted by police vehicles, began marching along Gravois toward the scene of Begic's death, where another vigil had been set up. As they marched, people shouted takeoffs on chants made famous by Ferguson protests, such as "What do we want? Peace!" and "Bosnian lives matter!"

One man carried a sign that read: "Where is CNN & BBC now that they have killed a Bosnian? Shameful!"

Adis Mahmuljin, a Bosnian who had arrived in the U.S. in 1995 and moved to St. Louis in 1996, said he organized the march as both a remembrance for those lost to violence, as well as a message to criminals.

"You can't come in and destroy our community, our businesses, our lives, and think that nothing is going to happen," he said. "Fine, they got arrested, they're going to get prosecuted, but we want to have a stand and show people that we're here, we're always going to be here, and there's nothing they can do about it."