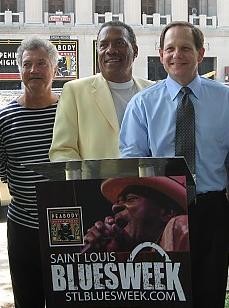 Bluesweek is the brainchild of Mike Kociela, who also operates the annual Taste of St. Louis street fair. Bluesweek is scheduled to run August 26 through September 5, with local blues acts playing a variety of venues downtown -- including an outdoor concert outside the Peabody (Kiel) Opera House. The festival will also include workshops, panel discussions and an award show.

Construction of the Blues Hall of Fame is already underway in the old Dillard's building on Washington Avenue that was once part of St. Louis Centre. The hall is to include classroom space, a recording studio and a bar and restaurant.