The announcers are trash, and no one wants to create an account on yet another streaming service 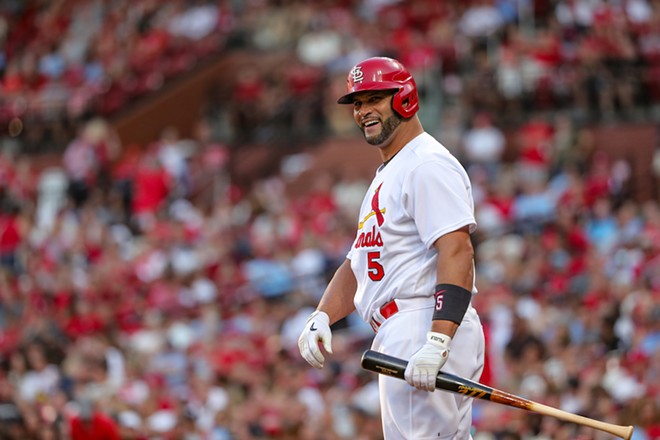 Ben Munson/St. Louis Cardinals
If you can't figure out how to log on to Apple TV, you may miss a historic home run from Pujols tonight.

There's no love lost between Cardinals fans and Major League Baseball today as fans try to figure out how to stream tonight's Cardinals game on Apple TV.

Tonight, the Cardinals will play the Dodgers in Los Angeles, and the game will not be on local carrier Bally Sports Midwest. Instead, those who want to watch will have to create (or find) their Apple IDs to watch the game on Apple TV+. You can visit tv.apple.com to create an account.

There is no other way to watch the game (except in person), but you can listen to it on KMOX 1120.

This is not the first time that the MLB has exclusively broadcast Cardinals games through Apple's Friday Night Baseball platform, though the other games were not as important as tonight's. Not only is Albert Pujols only two home runs away from hitting a record 700 career homers, but also the Dodgers and Cardinals are both first-place teams.

Many fans also don't realize that streaming the game on Apple TV is free. Some do realize that but are still annoyed at having to use yet another platform to watch the games. Plus, many think the callers on Apple TV aren't as good as Bally Sports Midwest.

The St. Louis Post-Dispatch even shared fan grievances with the Cardinals organization. "We spoke with MLB about the local concerns if Albert was on the verge of 700 home runs with no BSM coverage," Dan Farrell, Cardinals senior vice president for sales and marketing, told the Post. "Unfortunately the MLB-Apple contract is very tight with no flexibility related to local telecaster accommodations for milestone events."

New Yorkers aren't happy either, as the Yankees-Red Sox game tonight will also exclusively be on Apple TV, and Yankees player Aaron Judge is just one home run away from hitting the American League record of 61.

So if you're grousing about MLB's Apple partnership, you're not alone. Here are some of the best takes on Twitter.


Start-Up Idea: Meals on Wheels but instead of driving around delivering food, we drive around helping elderly Yankees and Cardinals fans set up their Apple TV+. Stream Team.

Both the Cardinals and the Yankees game is on Apple TV tonight. Just more proof that MLB hates its viewers.

So the cardinals face the dodgers on Friday …. Too bad a lot of people including myself can’t watch cuz of stupid Apple TV

Get ready to groan, people. The @Cardinals baseball game is going to be on @AppleTV on Friday. Do what I do, turn the sound off, and turn on the radio. Can announcers be any worse than those provided by Apple TV?

The Apple TV crew that has done the Cardinals games have been awful. I would have the same complaint if it was ESPN though and I didn’t get to hear the Cardinals announcers call Pujols 700.

Cardinals, why is this game on Apple, 90 percent of the followers of the Cardinals dont follow Apple TV, now we won't be able to watch. Just a way to get you to sign up with Apple.😡😡😡😡😡😡

Today is the ONLY day I have prayed for Albert to NOT hit homeruns. Is this wrong? @AppleTV sucks. @MLB do better, you owe it to @Cardinals and @Yankees fans. Holding history hostage, not cool.