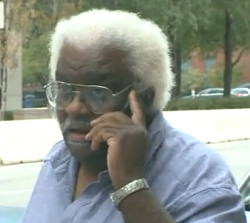 Fred Robinson, a former employee of the St. Louis treasurer's office, frequently didn't show up to work -- but he did find time to steal hundreds of thousands of public dollars. That is according to a jury which convicted the 71-year-old man of multiple fraud charges relating to the submission of false time sheets and the diversion of education funds.

Just want you want from the office responsible for public money!

Robinson was also the chairman of the board of trustees for Paideia Academy, a Missouri K-8 tuition-free charter school funded by state and federal money -- which Robinson has officially been convicted of stealing.

At the charter school, he maintained an office in the building and was involved in the day-to-day management of the school's administration, the U.S. Attorney's Office of the Eastern District of Missouri says in an announcement of the conviction yesterday.

During 2009 and 2010, Robinson stole around $242,333 of Paideia Academy funds, intended for the purchase, construction, renovation and rehabilitation of a building on West Florissant Avenue in St. Louis, according to testimony presented at trial. He diverted the funds to the development and operation of a day care center called Little People's Academy, which he planned to operate along with an associate at a private company called Paige C. Investments, LLC, which he partially owned.

He did not disclose his ownership and financial interest in the day care center to the board of trustees at Paideia, officials say, and his partner in the proposed center was a friend of his who worked as a bartender at a lounge frequented by Robinson.

This friend apparently "had no background, experience or training in early childhood education or the operations of a day care center."

From 2006 to 2010, as an employee for the St. Louis City Treasurer's Office, he submitted false weekly time sheets for hours that he did not work. The jury found him guilty of getting paid around $35,360 each year in salary from those inaccurate time sheets.   After all of this, he was convicted of one count of wire fraud and seven felony counts of federal program theft, marking an end to a seven-day trial. His sentencing will take place in July.

Earlier, Dannielle Benson and Frank Habeebullah were also charged in connection with this case and both pleaded guilty last year.

U.S. Attorney Richard Callahan says in a statement regarding potential charges against other defendants:

The current status and progress of the investigation into the St. Louis City Treasurer's Office is reflected by the charges that have been filed to date. No further charges are anticipated unless or until additional evidence is developed.

Daily RFT left a message for his public defender, who told the Post-Dispatch that there will be an appeal.

The paper also notes that Robinson was fired from the city office before newly elected Treasurer Tishaura Jones stepped up to the position in January.