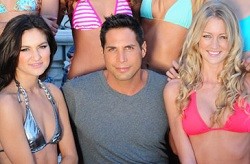 What that means for Tamarra Favazza, a St. Louis woman who won a $5.7 million judgment against Francis last summer is unclear. Though it will likely make it even more difficult to collect the sum. Last year, Favazza complained in federal court in St. Louis that Francis was hiding his assets to avoid the paying the judgment.

In the federal complaint filed last June, Favazza's attorneys argue that Francis has created multiple alter egos and shell companies in an attempt to fraudulently transfer assets and evade creditors. What's more, they say Francis is loaded and not the pauper he claims to be. Among his assets hidden away, says Favazza's lawyers, are:

Continue for details on Favazza's surprise appearance in a GGW film.