St. Louis: Worst Teeth in the Nation According to Magazine 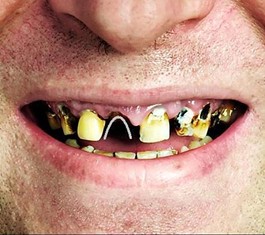 We figured our meth labs were to blame.

Though as it turns out, researchers at Men's Health didn't even account for Missouri being the No. 1 state in the nation for illegal meth labs when they recently ranked St. Louis as having the worst teeth in the nation.

So, why is it that Men's Health thinks our teeth are so decidedly British nasty? The study took into a consideration five factors such as water fluoridation and dentist visits.

According to the magazine, St. Louis ranked last or near last in nearly every category.

St. Louis is a great city. There's a lot to smile about--except for the smiles themselves. St. Louis is the town with the worst teeth, the most dentally challenged in the land. In other words, it failed our oral exam.

"I don't think St. Louis is any worse than other cities," Dalin tells Daily RFT. "We have the optimal amount of fluoride in our water and over 1,200 dentists in the St. Louis region. As to where they're getting their information on floss use or the sale of oral hygiene, I have no idea."