Monica Obradovic
CITYPARK Stadium will hold a soccer match for the first time since an MLS expansion team was announced for St. Louis in 2019.

The game will take place on November 16, a friendly between St. Louis CITY SC’s development team, CITY2, and the German-based team, Bayer 04 Leverkusen.

Leverkusen competes in the German professional league, Bundesliga, where it currently ranks 15th.

It is the first game in CITYPARK Stadium, formerly Centene Stadium, since St. Louis announced a Major League Soccer team in 2019.


It’s Heartland vs Deutschland. CITY2 vs @bayer04_en. A fall friendly in STL.

But the road to opening the downtown, 22,500-seat stadium has been bumpy.

The stadium was set to host the final MLS Next Pro regular season game on September 18, but electrical problems delayed the opening.

Then, just one day ago, the stadium lost its namesake, Centene, after the St. Louis-area managed care company backed out of a 15-year deal. The team announced it will continue looking for a new sponsor.

But fret not, St. Louis CITY. Maybe the organization doesn't need to look for a new sponsor. We offered a few ideas that the team should consider. 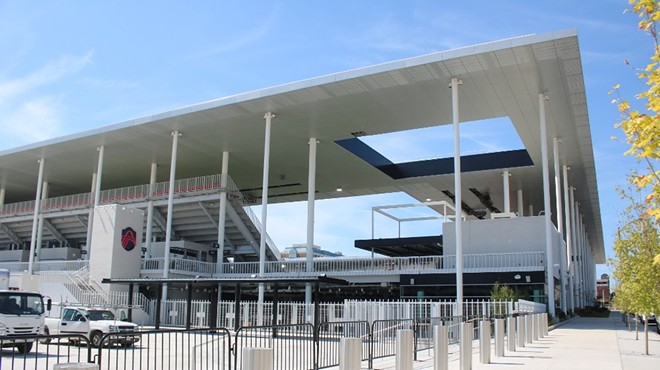 10 Names for St. Louis' Soccer Stadium That Are Better Than 'CITYPARK': The electrocuted stadium is already such a disaster that a company being sued for Medicaid fraud says "nah"

In the meantime, though, the electricity is back in the stadium. Tickets for the friendly will go on sale tomorrow, October 28.