Stan Musial Bridge: Late, Great Cardinal To Be Memorialized On I-70 Over Mississippi River 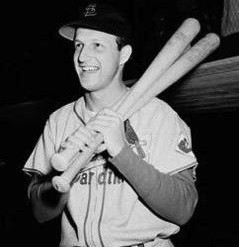 Six months after the great Stan Musial passed away, the Cardinals icon is one step away from having the Mississippi River bridge on I-70 renamed in his honor. Legislation naming the project in St. Louis the "Stan Musial Veterans Memorial Bridge" passed unanimously in the United States Senate yesterday -- and President Barack Obama is expected to very soon sign the bill into law.

If that long name sounds like too much of a mouthful to you, Senator Claire McCaskill has been pushing a shortened monicker -- the "Stan Span."

"Naming this bridge is just one small piece of trying to recognize an extraordinary man with great character, who was a wonderful role model to everyone in our community and across this country," McCaskill says. "So, I'm looking forward to the fact that in the future as everyone drives across that bridge they will explain to their children why it's called the 'Stan Span.'"

The Stan Musial Veterans Memorial Bridge name is the product of a compromise after some legislators on the other side of the river wanted a bridge named that honored those who serve our country.

Meanwhile, family and supporters of Andy Gammon, a worker who died on the project, have also pushed to have the bridge named after him. There has since been a separate effort to name part of the highway in his honor.

Sam Levin
Fans outside of Busch Stadium after Musial's death.

After passage of the bill last night, the Musial children -- Dick Musial, Gerry Ashley, Janet Schwarze and Jean Edmonds -- released this statement through the Cardinals:

We are very grateful that the new Mississippi River Bridge will be named the Stan Musial Veterans Memorial Bridge. Our father would be particularly proud to be forever linked to the many men and women who have bravely and selflessly served our nation.

Stan Musial Veterans Memorial Bridge is a fitting tribute to all veterans including our greatest Cardinal #StanSpan pic.twitter.com/15hYsGG2rM