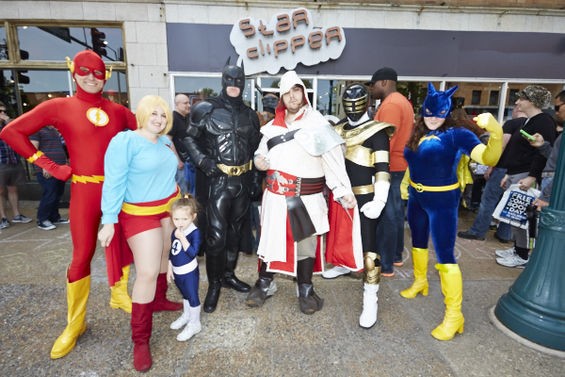 Owners A.J. and Ben Trujillo made the announcement this morning on Facebook, breaking the hearts of thousands of comic fans and pop-culture enthusiasts in the process.

It is with great regret Ben and I must inform you that after more than a quarter century serving St. Louis, Star Clipper is closing its doors. The personal and professional experience of managing Star Clipper has been the most important of our lives. We were lucky to inherit the legacy from wise people ahead of their time, grow with the medium, and love the job. But the time has come to bring Star Clipper to a natural conclusion. Making the decision to close after our 17-year tenure was very difficult. We will miss the connection to St. Louis' incredible fan community, talented creative professionals and fellow Loop businesses. We have been privileged to work with staff who set the standard for professionalism. Our suppliers and partners have our gratitude for all their support over the years.

Star Clipper won the prestigious Will Eisner Spirit of Comics Retailer Award in 1999 for its service to the comic book industry, and racked up an impressive nine wins as the region's best Comic Book Store in the Riverfront Times' annual Best of St. Louis issue.

Along the way, the Trujillos shaped how a generation of St. Louisans viewed comic shops. The cliched dingy hole with an angry nerd hiding behind racks of back issues was replaced by an expansive, clean and well-lit store staffed by enthusiastic employees who helped neophytes and experienced old farts alike find the comic that was right for them. Slideshow: Free Comic Book Day 2014 at Star Clipper

The store hosted signings by established artists Anders Nilsen, Johnny Ryan and Neal Adams as well as up-and-comers such as individual members of the Ink & Drink comics collective and Marvin Curry. Its annual Free Comic Book Day festivities were renowned for the size of the crowds (12,000 comic books were given away in 2014, which was down from the year before) and the exuberant sets by musicians Superfun Yeah Yeah Rocketship and Little Big Bangs, among many other bands.

Star Clipper begins liquidating its stock this Saturday during the Loop Ice Carnival, with 25 percent off everything in the store. Customers with subscriptions will be contacted to explain what arrangements have been made regarding orders.

This is a dark day for comic fans.