Via
Will you give a green puppet a piggy-back ride on May 4?

"It is a period of civil war. Rebel spaceships, striking from a hidden base, have won their first victory against the evil Galactic Empire." 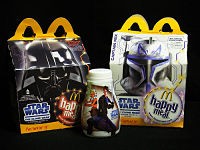 Via
The fries are strong with this one.

This kind of popularity naturally prompted an international holiday of sorts -- Star Wars Day. Each year on May 4 (May the fourth... like "May the Force be with you." Get it?), fans celebrate George Lucas' cash cow while cosplaying, tweeting or having lightsaber battles in the park. But is Star Wars the only worthy space opera out there?

No. There is another.

The Star Trek franchise also features epic space battles, charming scoundrels and shocking genocide. Casual sci-fi dabblers occasionally mistake one series for the other, but real fans know that beneath the superficial similarities there are huge differences between two -- and those folks will defend their chosen franchise nearly to the death.

On May 3, the Saint Louis Science Center will give fans the opportunity to battle it out during its May First Friday series, but we're already itching for a fight. Below, we pit Star Wars against Star Trek in a few point-by-point comparisons. Will your favorite win? Find out when you beam us up, Scotty, because we're going to Tosche Station to pick up some power converters.

Memorable phrase: "May the Force be with you" vs. "To boldly go where no man has gone before."

Star Wars: "May the Force be with you" is uttered throughout the galaxy as a good luck wish, a prayer, a ritual and a goodbye. It's so ubiquitous that even our mom knows what it means. Besides, it's the foundation for a nerd holiday, which is the whole reason we're writing this.

Star Trek: As part of a longer sentiment about space being the final frontier, "To boldly go where no man has gone before" inspires intrigue, determination and pride. Captain Kirk introduces nearly every episode of the original series with these words, and they've even been applied to outside works like NASA projects and an episode of DuckTales.

Star Wars: A farmboy on Tatooine, Luke Skywalker is a whiny teenager living with his aunt and uncle before fate brings C-3P0, R2D2 and Obi-Wan Kenobi into his life. He learns Jedi 101 from Ol' Ben, destroys the first Death Star and gets some perspective from a dying Yoda. Once a full Jedi, Luke eventually convinces his father Darth Vader to stop being a bad guy and later sets up his own Jedi academy. He eventually marries the fiercest redhead in the galaxy and fathers a son, whom he names Ben.

Star Trek: James T. Kirk is a cocky kid from Iowa who becomes the only Starfleet Academy student to beat a special no-win test. As captain of the USS Enterprise (and Starfleet's youngest captain ever), Kirk leads his crew with cunning and confidence. With his best friend Spock as his first officer, Kirk explores the far reaches of space while conquering villains and playing with tribbles. A wooer of many women, Kirk briefly found love with Carol Marcus; the relationship did not last, but Carol bore Kirk's son David. After defeating Khan, Kirk revived a dead Spock and eventually worked with future Enterprise captain Jean-Luc Picard.

Point: Star Trek, because Kirk is a bad-ass and Luke is a bitch.

Up next: weapons and brainiacs.