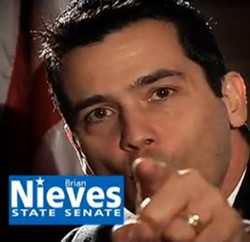 YouTube
Nieves in a campaign commercial telling Barack HUSSEIN Obama to go 'eff himself.
The man featured in a Tea Party movie discussing the possibility of the "patriot movement" taking up arms against the government, stands accused of brandishing a weapon against a member of his own party.

The Kansas City Star reports today that state Rep. Brian Nieves (R - Franklin County) is at the center of a complaint made Thursday to police in Washington, Missouri. According to the Star, a campaign worker for Dick Stratman (Nieves' challenger in the Republican primary for state Senate) stopped by Nieves' campaign office Wednesday morning to offer congratulations for Nieves' victory in the primary.

The campaign worker, Shawn Bell, was leaving the office when he reportedly ran into Nieves, who -- per the complaint -- threw Bell against the wall and then drew a handgun from his pocket that he used to intimidate Bell.

Bell alleges that Nieves then berated and insulted him, threatened to kill to him and asked if he was wearing "a wire." Nieves allegedly head-butted Bell and slapped him across the face.

After several similar indignities, according to Bell, Nieves pulled him into an office, looked through Bell's phone, forced Bell to call and apologize to Nieves' wife for things that happened during the campaign and asked him pointed questions about the campaign.

Eventually, Bell alleges, he was allowed to leave.

The hand-written statement is written on Washington Police stationary and is signed by Bell.

It's important to note, that no charges have been filed against Nieves and the allegations did come from a political rival. Still, some pretty crazy stuff. Why, you'd almost think that Bell was as bad -- in Nieves' eyes -- as the POTUS.