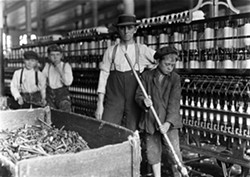 Jane Cunningham: Misery is a great lesson for Missouri kids.
Jane Cunningham (R - West County) believes Missouri kids need to improve their work ethic so she's sponsoring a bill (SB 222) that would repeal much of the state's child labor laws.

According to the bill's official summary, children under the age of 14 would no longer be barred from employment. They'd also be able to work all hours of the day, no longer need a work permit from their school and be able to work at motels and resorts so long as they're given a place to lay their weary heads each night. Moreover, businesses that employ children would no longer be subject to inspections from the Division of Labor Standards.

In an interview yesterday with the St. Louis Beacon, Cunningham defended her legislation by nothing that her two sons -- now adults -- both held jobs as minors and are today better for it.

"My aim is to put back some common sense,'' Cunningham told the Beacon. "We're not doing students any favor by telling them, 'You cannot work.' "

Still, the bill is under attack from the AFL-CIO and other labor groups, who believe there's good reason that current law only allows children to work three hours on school days and no more than eight hours on non-school days.

"The Missouri legislature can always be counted on to come up with bizarre legislation, but Senate Bill 222 is the strangest we've see in awhile," writes the Kansas City Star in an op/ed this morning.

Teenagers of all ages will be freed from restrictions limiting how many hours they can flip burgers. And if they want to staff the drive-through window all night long, Cunningham is for that too. To heck with those early morning classes.