The St. Louis boxer takes the ring against Efe Ajagba on ESPN this Saturday 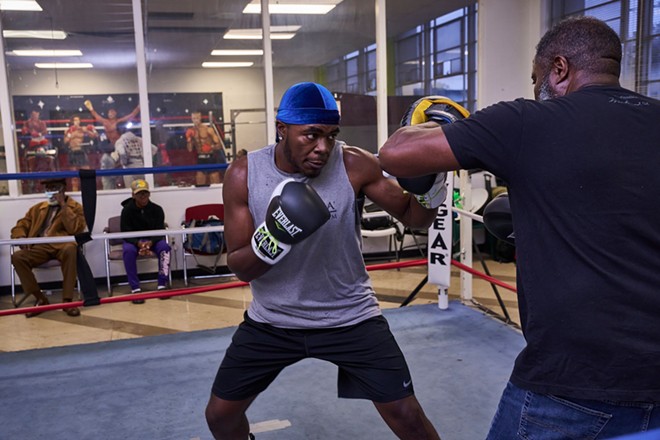 Theo Welling
Stephan Shaw trains with his coach and dad, Brian Shaw, in a St. Louis-area boxing gym in October.

Stephan Shaw has waited for, talked about and worked toward this moment since he was a kid, punching the walls of his St. Louis home. It’s what he dreamed of when he won boxing’s National Silver Gloves tournament as an amateur. It’s what kept him going during his darkest depressions and during his longest stretches away from the sport.

Now he’s here: less than a week from a nationally televised fight on ESPN against Efe Ajagba, a 16-1 heavyweight-champion contender. For Shaw, 30, it is the biggest fight of his career.

At 6 feet 4 inches, 235 pounds, Shaw, nicknamed “Big Shot,” is one of the best fighters from the St. Louis area with an 18-0 record, co-promoted by Top Rank and Lou DiBella. Shaw will fight Ajagba at Turning Stone Resort Casino in Verona, New York, on Saturday as the main card event, a first in his career.

For Shaw, his boxing career has finally headed in the direction he wanted.

“Just overnight,” he says, “my life is about to change.”

But that has to feel like an enormous amount of pressure, right? Interviews left and right. Fighting on ESPN. Knowing that his career could skyrocket — or not — in less than an hour in a boxing ring. But Shaw doesn’t feel that way.

“I love it, bro,” he says. “This is what I signed up for. And this is just all the kind of perks and stuff that I wanted, man. All of this kind of stuff comes with being one of the best fighters in the world. I’m right at home.”


Shaw’s journey was highlighted in an October 19 RFT cover story. Raised in the St. Louis area, Shaw came from a prominent local boxing family. His father, Brian Shaw, boxed in the junior Olympics, and his grandfather, Winston “Buddy” Shaw, was a legendary coach at Cochran Recreation Center. 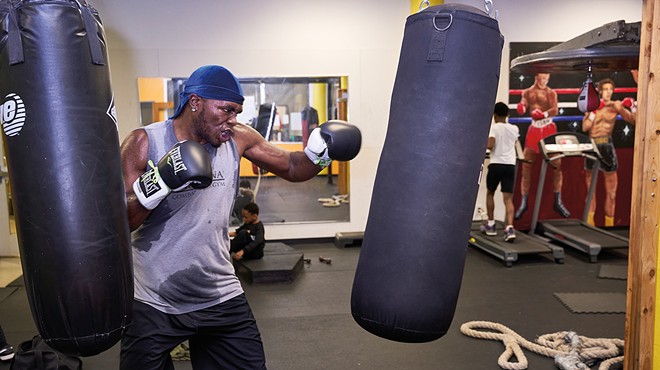 St. Louis Boxer Stephan Shaw's Make-or-Break Moment Is Here: One of the best heavyweights in the world trains in a north county elementary school basement


A natural from the start, Shaw won the National Silver Gloves Tournament twice by the time he was 10 before quitting boxing for six years. After graduating from Hazelwood Central High School and attending Harris-Stowe State University, he picked up where he left off, serving as an alternate for the 2012 national Olympic team and winning national boxing tournaments.

Shaw made his professional debut in 2013 and hasn’t lost since, winning 13 fights by knockout and rising to the 28th-best heavyweight in the world along the way. He also received a job as the sparring partner for the former heavyweight champion Deontay Wilder.

Despite the victories, Shaw’s career has been full of roadblocks, long layoffs, cancelled contracts and an overwhelming feeling that, regardless of his talent, his career has failed to progress fast enough. For years, he fought in empty gyms, made little money and contemplated quitting the sport.

That’s what makes this moment so much more special — overcoming the hardship he has endured and finally receiving the money, recognition and respect that matches his skills.

“It’s beautiful, bro,” Shaw says. “It's something that I pray about. I feel like God answered my prayers. … When they asked me about this opportunity I jumped on it.”

But Saturday won’t be an easy fight. Shaw will take on Ajagba, a 6-foot-6 powerful puncher from Nigeria who is currently ranked as the 32nd best heavyweight boxer in the world, according to BoxingRec. He will be the most formidable opponent of Shaw’s career. Ajagba, known as “The Silent Roller,” previously fought on the undercard of Tyson Fury vs. Deontay Wilder III, where he suffered his only loss.

“You can't take anybody for granted, and I'm not taking him for granted at all,” Shaw says. “But like I said before, I'm definitely gonna go in there defensively responsible and that's how you’re supposed to be as a fighter. The art of boxing is to hit and not get hit. I try to master that.”

Initially, Shaw was set to take on undefeated Italian heavyweight, Guido Vianello, while Ajagba fought current bridgerweight title holder, Óscar Rivas. But after Rivas backed out of the fight due to an eye injury, Shaw stepped in to fight Ajagba. In a sport where boxers avoid tougher matches for fear of losing, both Shaw and Ajagba were praised for taking a challenging, evenly matched contest.

The last few months have been busy for Shaw as he prepared for the fight — a much-welcomed reprieve from the unwanted layoffs. His previous fight was in November when he defeated the former top-ranked, but aging Rydell Booker in a unanimous TKO. 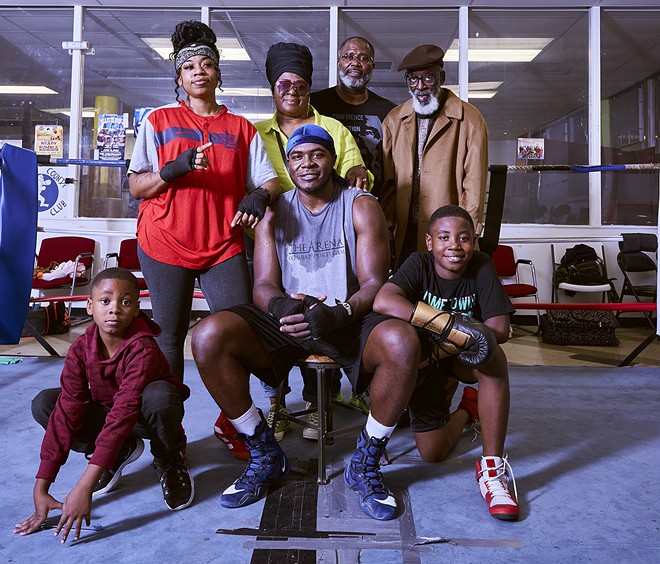 Theo Welling
Stephan Shaw, surrounded by his grandfather, parents, wife and kids, continues to live in St. Louis, where his family is an integral part of his life.

Shaw still lives in St. Louis with his family, but for the past few weeks, he has stayed in San Diego, where he holds an intensive training camp with his trainer, Basher Abdullah. His exercise regime is full of various running, strength and boxing workouts per day. When Abdullah spoke to the RFT in the fall, he said he doesn’t know a heavyweight boxer who works harder than Shaw.

One week before the fight, Shaw said he was slowing down camp to prepare mentally and physically. He’s trying to rest by watching YouTube videos and FaceTiming his wife.

“I try to relax, man,” he says, “and just focus in on the task at hand, and not make too much out of it. ... Just stay relaxed, stay composed and go in there and do my thing.”

Shaw says he doesn’t feel nervous. When he steps into the ring on Saturday, with ESPN cameras staring him down, he says he will be channeling lessons that he learned by watching tapes of Hall of Famer Floyd Mayweather.

Stephan Shaw will fight Efe Ajagba at Turning Stone Resort Casino in Verona, New York, on Saturday, January 14. The program will begin at 9 p.m. CST with other fights, but Shaw-Ajagba is expected to take place around 11 p.m. To watch the fight, visit ESPN+.