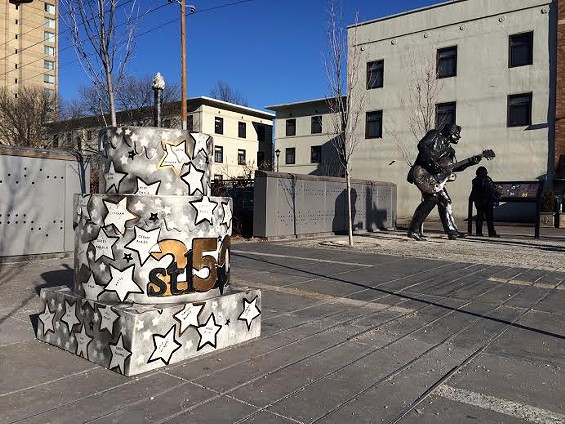 Lindsay Toler
The Walk of Fame STL250 birthday cake in the Delmar Loop.

Love 'em or hate 'em, the STL250 birthday cakes are officially the 2014 St. Louis Person of the Year.

The cakes inherit the title from St. Louis Cardinals pitcher Michael Wacha, who was voted 2013's person of the year in the annual poll posted by St. Louis mayor Francis Slay.

This year, the cakes took the cake against four other finalists: Rasheen Aldridge Jr., director of Young Activist United and a Ferguson Commission member; LGBT rights activist A.J. Bockelman; the contentious recorder of deeds-elect Sharon Carpenter; and Tricia Roland-Hamilton, director of Magdalene St. Louis, a home for victims of sex trafficking and abuse.

The cakes earned 38 percent of the vote, with Roland-Hamilton coming in second place with 22 percent, followed by Carpenter (18 percent), Aldridge (17 percent) and Bockelman (5 percent).

"The cakes had a large and engaged base -- and they ran a campaign with a strong field presence and a robust social-media component," says Richard Callow, a political and communications consultant for Mayor Slay. "I plan to keep an eye on them just in case marking popular locations isn't the limit of their ambition."

Slay's team originally nominated 25 prominent St. Louis people, businesses or concepts to be possible "people" of the year, and the top five finalists earned almost 70 percent of first-round voting. More than 10,700 people voted in the nominating poll and the final poll.

For many, the cakes became a reason to tour the St. Louis region and discover new historic or cultural sites.

"The project, as several voters mentioned in the comments section, inspired St. Louisans to get out and count our blessings," according to the announcement on the mayor's website.

Not everyone found the cakes to be so inspiring. St. Louis Egotist, a blog about advertising and marketing news, gave them a different title: Worst Creative Idea in St. Louis of 2014.

"Like leftover birthday cake that has grown stale and attracted flies, no one wants these eyesores to last any longer than they have to," St. Louis Egotist says about the cakes, also called them "brightly colored, ill-conceived turds."

St. Louis' year-long sestercentennial birthday party petered out by June, when the only remaining staff member stepped down into a volunteer role.

After an appearance on New Year's Eve at First Night in Grand Center, many of the cakes will be auctioned off to raise money to build Founders Plaza, a gathering place around the Market Street statue of Pierre Laclede.