STLCC Fires Instructor Who Was Body-Slammed at Trustee Meeting 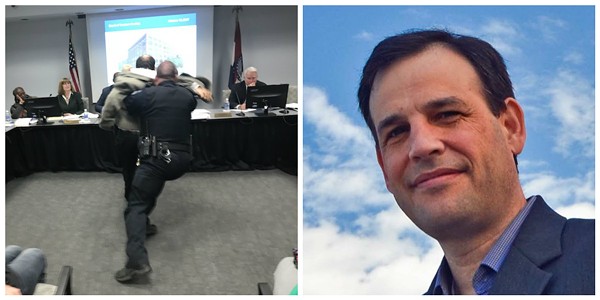 COURTESY OF SEIU LOCAL 1/STEVE TAYLOR
Steve Taylor, an adjunct instructor at St. Louis Community College, was forcibly taken down by a police officer at the board of trustee meeting last Thursday.
Steve Taylor, the adjunct instructor who was violently arrested at a St. Louis Community College board of trustee meeting last Thursday, says he has been fired.

Taylor says he received three versions of the same letter from the college Friday — one left on his doorstep, another delivered via UPS and a third sent to his college email, before he was locked out of it. All three made it clear that he could not return to any of the college's campuses without being subject to arrest.

He later learned that various references to his work had been scrubbed from the college's website (although a story about an award he received for teaching excellence still remains).

"It kind of feels like working for Stalin," Taylor says.

A spokeswoman for the community college said she could not comment on personnel matters.

Taylor, a 53-year-old mathematics instructor, sits on the contract negotiation committee for the union that represents adjuncts. He'd come to the trustee meeting to speak out against the "culture of intimidation" he saw at the college.

But when the acting chairman, Rodney Gee, told the audience they were not allowed to applaud speakers in the public comment section, even though applause had been permitted during other parts of the meeting, Taylor objected. He stood up and began to walk down the aisle toward the trustees, attempting to tell audience members they were within their rights to clap.

That's when a police officer grabbed him from behind. The college has released a statement saying Taylor "charged" the table where the chancellor was sitting. Taylor has said he was merely trying to regain his balance as the officer yanked his coat backward.

Either way, the outcome is that Taylor was slammed to the ground. He was then charged with disturbing the peace and resisting arrest, although he was allowed to go to the emergency room instead of being booked into jail.

Video released by the college Friday shows the incident in full:

Reached this morning, Taylor says he has been avoiding driving, since he has been told he he has a concussion. But it's still hard to know that his 11 a.m. college algebra class meets this morning on the Wildwood campus — and he is barred from being there.

"To be so draconian as to say 'if you're on campus, you'll be charged with a felony' — I don't think they want me talking to anyone on campus," he says. "It's really sad."

He adds, "If you read the story about the award I won, I praised the college. It was such a collegial environment. But everything has changed under this chancellor" — referencing Jeffrey Pittman, who took over as chancellor in July 2015. "It's a totally intimidating culture."

Students, faculty and staff had planned to meet this morning at 10:30 a.m. at the Meramec campus to protest recent events at the college. A spokeswoman for the union said they'd be delivering a report card to the administration at 11:30 a.m.

Editor's note: A previous version of this story referred imprecisely to Taylor's reasons for not driving. He has been told he has a concussion; it's not just that he fears having one. We regret the error.