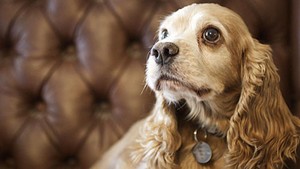 Jennifer Silverberg
74 dogs were confiscated from a Crane, Missouri, facility last week -- one year after the state gave the business a passing grade
A Crane, Missouri, dog-breeding facility shut down by inspectors from the Missouri Department of Agriculture last week for a host of severe deficiencies was cited for a few violations by the state just one year before, according to records obtained by Daily RFT.

And the brief, one-page inspection report on the facility filed in March 2010 hints at the very problems that led inspectors to shut down Linda Baxendale's business, Kneedeepincollies, last week -- namely, a lack of outside pens for the dogs, a lack of good shelter other than in Baxendale's house, and a lack of a formal program for veterinary care.

But rather than take immediate action, the report shows that the Department of Agriculture inspector gave Baxendale one month to correct three of the four violations noted. There is no record suggesting that inspectors returned in April 2010 to make sure Baxendale reached compliance.

As Christine Tew, a spokeswoman for the Department of Agriculture, notes, the law requires only that inspectors visit a breeding facility once each year. "With [lower level] violations, they may be given a 30-day deadline, but there's no guarantee an inspector will be out there again in 30 days," she acknowledges. And, in Baxendale's case, there's no paperwork suggesting the inspector made a return visit.

Instead, the department appears to have waited eleven months, until the time of its next annual inspection. At that point, it was sufficiently troubled by the conditions to call in the Stone County Sheriff to confiscate 74 dogs on the premises.

The dogs are now in the care of the Humane Society of Missouri. According to its press release, the standard collies and bichon frises at Baxendale's business were

living inside half of a double-wide trailer home on the property. The half of the trailer in which the dogs were housed contained numerous wire crates with dogs and puppies living in their own waste. Carpeting in the trailer was soaked with urine and feces. The odor of ammonia overwhelmed officials when they first entered the premises. Several sick, lethargic and listless dogs and puppies were found. Rescuers believe little to no veterinary care had been provided to the animals. The dogs appeared to be thin with coats covered in mud, feces and urine. Only filthy water was available for the animals.

So what happened between March 2010 and February 2011? Did the inspector who visited in March 2010 fail to intervene when he should have? Or did things fall apart between the annual inspections?

At this point, it's too soon to say. (Daily RFT has requested the Agriculture Department's most recent inspection report; we'll let you know what we find out when it becomes available.)

But it is interesting to note that some of the violations Baxendale was charged with fixing in March 2010 -- yet never held accountable for -- may have led to the conditions that the Humane Society reported eleven months later.

For example, in the March 2010 report, the one high-level violation was a single item noting that "12 dogs [currently] in the house that need pens out side." The report indicates that item was corrected immediately -- although it doesn't detail precisely how Baxendale would suddenly have pens for twelve dogs at the ready.

And the lower-level violations flagged by the inspector in March 2010 -- including the need for six more dog houses, the lack of a plan for veterinary care, and the need for shelters with adequate protection from cold and heat -- seem to be related to the problems reported by the Humane Society in its press release.

Those are the violations that, apparently, inspectors didn't follow up on, instead trusting Baxendale to remedy them by the deadline they gave her.

Tew notes that inspectors followed the rules: "It appears they were inspected once each year, which is the mandate. We certainly would like to be able to visit these businesses more frequently." But, she adds, the department has a heavy workload. Twelve inspectors are charged with 2,705 licensees.

A Humane Society-backed initiative, Prop B, was passed by Missouri voters in November. It would crack down on breeders, allowing no more than 50 dogs in any business and allowing inspectors to confiscate animals on the spot.

Baxendale's dogs, however, were confiscated last week under the old law. Even if the new law survives legislative attempts to repeal it, it won't go into effect for a year. And, perhaps most germane for this case, the new law would not increase funding for inspections.

One final note: The one clear difference between what inspectors saw in March 2010 and February 2011 may be the number of dogs on the premises. In March 2010, the inspectors noted that Baxendale only had 38 dogs. By last week, that number had grown to 74. And if there wasn't adequate housing for 38 dogs, it's easy enough to imagine what happened when the number doubled.