Strange Days to be a Cardinal Fan

Send a News Tip
Okay, so I just have to ask; when did we suddenly lurch off the beaten path and into bizarro world? I've been a Cardinal fan for a lot of years, and I don't believe I've ever seen things quite like I'm seeing now.
First, we have that disgrace of a chat that John Mozeliak took part in a couple of days ago. Look, I'm not sure exactly what's going on over at the Post-Dispatch, but I can only assume that the tone coming from that quarter is somehow engineered to draw attention to a flagging paper. Otherwise, I fail to see any reason for the pandering to the lunatic fringe.

As for the fans themselves, maybe this will finally give a little truer perspective on that whole "best fans in baseball" line of shit.

Yes, this is a passionate, knowledgeable fan base, and they support the team beautifully. But you know what? There's plenty of assholes in this town, just like in every other town. Even so, it's hard for me to believe the kind of ugliness I'm witnessing pretty much on a  daily basis.
click to enlarge 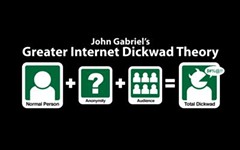 majicmarc.wordpress.com
Probably the best explanation.
Then, as if it isn't bad enough that we're forced to put up with this constant barrage of vitriol, the news then comes out that the Cardnals are going to be forced to start the season without their third baseman, who is out with a shoulder injury. Now, if I were to say third baseman and shoulder injury, who do you immediately think of? Yeah, me too. But didn't he get traded?
So Troy Glaus won't be back until the middle of April, at the very earliest. In the meantime, I'm sure that we're going to have to listen to someone come up with a way to blame the DeWitt family for Glaus' injury. Fantastic.
In a related note, Hee Seop Choi was seen leaving Troy's home in the early hours of the morning last week, carrying a tire iron. I guess Troy had a flat or something. Nice of Choi to help him out. 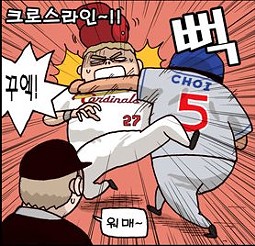 doubledogmusic.com
The last time Hee Seop Choi helped out a Cardinal
I'll admit, it's been a little tough to be a Cardinal fan this off-season. They seem so close to being a really good team, and yet there are also some pretty serious holes that apparently aren't going to be filled. We've all been through the routine with Chris Carpenter and his amazing exploding arm, yet the Cardinals appear to be counting on him to be healthy and pitching this season. The easy answer, of course, is that the Cards figure they'll get three million fans again this year, and they just don't care about winning.

Hell, DeWallet's probably getting ready to sell the team in a couple of years anyway. Why would he care about putting a winning product on the field? Stands are going to be full anyway. Easy answer? Yes. Correct answer? Probably not.
And so I ask again: when did we cross over into this alternate dimension? I thought we traded away our third baseman with a bum shoulder, yet here we are. I thought this was St. Louis, not Philly. Yet you read the message boards, and listen to the call-in shows, and it certainly seems that the only thing missing is an East Coast accent and the word douchebag being constantly tossed around.
Strange days in St. Louis, man. Strange days.