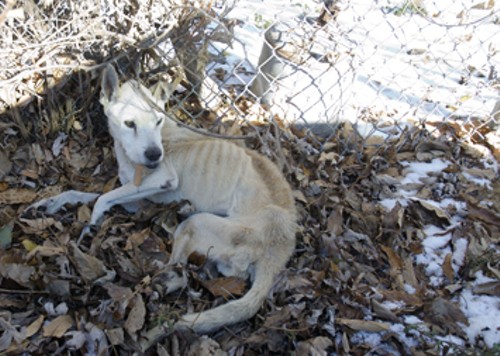 Stray Rescue
Francis, the Shephard mix rescued from the cold, died during surgery this week.

Stray Rescue put out an urgent letter asking for donations and volunteers to help homeless dogs and cats during this season's particularly biting weather.

Just this week, Grimm rescued a Shepard mix that was severely dehydrated, malnourished and hypothermic.

Sadly, the dog -- which Grimm named Francis for St. Francis of Assisi, the patron saint of animals -- died during surgery, after just hours out of the cold.

In a video posted to YouTube Thursday, a pack of dogs tentatively approaches Stray Rescue volunteers helping them survive on the barren, white landscape by leaving cans of dog food.

While volunteers regularly leave food for strays, only the most critical cases can be taken in from the elements while the full animal shelter operates on a tight budget.

"It is particularly hard to leave a comparatively healthy-looking pack behind that, for the time being, appears to be in fair shape," Grimm says. "As a rescuer, one of the hardest things to witness is when dogs you become familiar with on a particular route slowly deteriorate before your eyes as they try their best to endure the merciless cold."

Stray Rescue is asking for help, especially financial donations and foster parents for animals taken off the streets. The shelter also asks for donations of garbage bags, animal treats, leashes, collars and other needs.