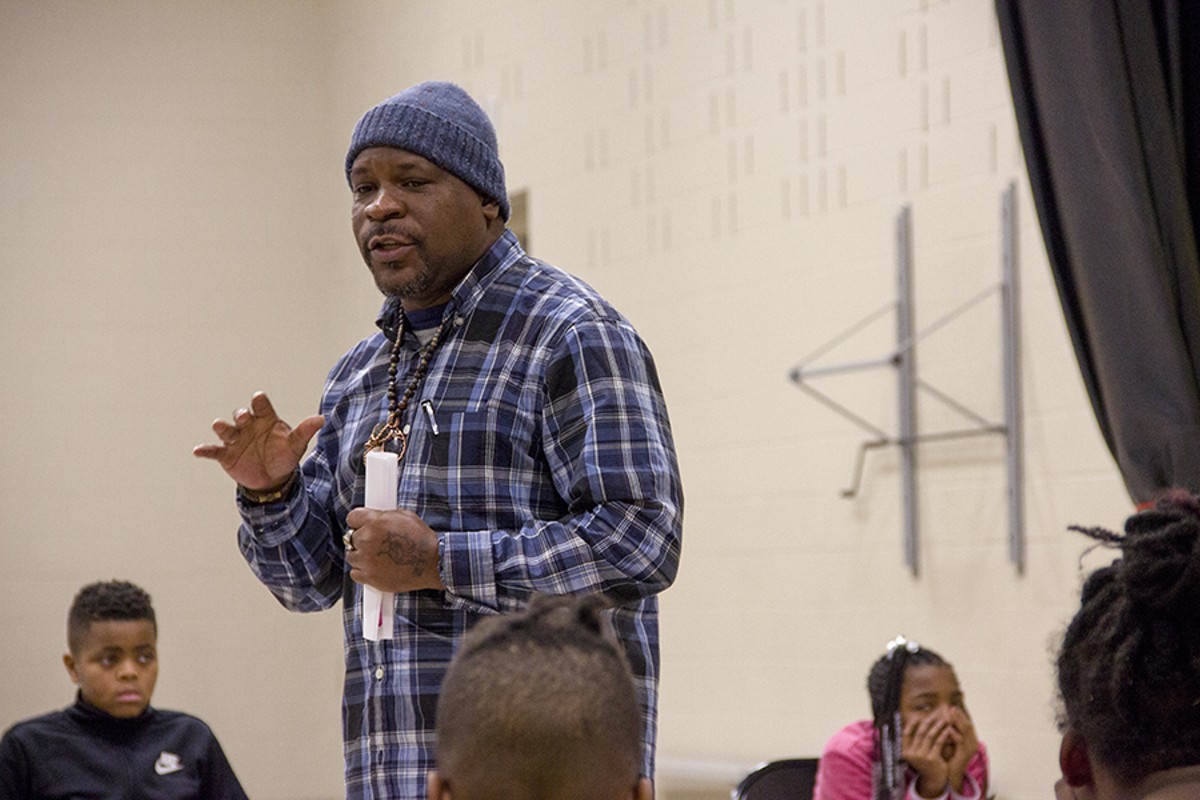 There's a recurring story told by gang-prevention mentors, and it's not about gun violence or drug overdoses. Lay those details on too thickly, they know, and you only titillate kids. Instead, the story they tell is about the capacity for change.

Years before he changed his name to Sultan Muhammad, Ronald Goodman was just another youth with a gun, a bad attitude and a blue bandana. It was the late '80s, and Muhammad — who went by Lil' Daddy Raw — was messing around a supermarket with three other kids. Running through the store, he bumped someone's cart.

The cart belonged to Carey Cunningham, then a young St. Louis public school teacher and mentor with an outreach program called the Association of African American Role Models. The program targeted young men living near then-Harris-Stowe State College's midtown campus. At the time he ran into Muhammad, Cunningham was buying snacks for the group's weekly meeting.

"He gave me a strange look," Cunningham remembers. "I said, 'Why don't you meet us outside and have a conversation.'"

Cunningham was then 26. He hadn't grown up like Muhammad had, and certainly not during the period that would later be considered the worst years of St. Louis' crack epidemic. Distinctive street gangs like the Crips and Bloods were still a burgeoning enterprise.

They talked outside the supermarket, and Cunningham made the invitation. But the young gangbanger skipped that night's meeting.

The next week, he showed up.

"I can recall him crying after the meeting," Cunningham says today. He soon got to know the young Crip, and says it wasn't long before he started to see some changes. (Asked about it now, Muhammad relates that his time with Cunningham temporarily brought down his gang barriers — he even started wearing red, a mortal sin for a Crip.)

Cunningham says he learned a lot from the teenager. The realities of gang violence were foreign to him, and he hadn't realized the danger that young men faced just crossing between neighborhoods. Meanwhile, Muhammad was "raised by a gang," having been kicked out of his grandparents' home after nearly getting his family killed in a gunfight — a shootout that had been sparked simply by a rival Blood wandering in the wrong territory.

Looking back, Cunningham remembers Muhammad as a bright kid with a willingness to learn and read about black history. But after a few of those weekly meetings, Muhammad went back to the streets. After a while, Cunningham stopped seeing his face at the meetings.

In 1992, Cunningham was watching TV when he heard the name Ronald Goodman. There was the teen's face on the screen. He'd been arrested for armed robbery.

Cunningham was shocked — and betrayed. He'd put so much time into the young gangbanger, only to have him squander his life on street crime. He figured the kid was lost for good.

"I was really hurt at that," Cunningham admits. "I never communicated with him when he was locked up. I was so hurt, being a mentor and seeing your mentee going astray."

It was a reaction Cunningham now regrets.

"I had to learn, that's what happens," he says now. "I learned that people aren't going to change right away. I had to understand there are bigger forces involved in young people's lives that we couldn't see."

That brightness he'd seen in Muhammad survived prison, and the ex-Crip came out with a new name, a GED and a mission. Post-release, it was Muhammad who reached out to his mentor, and the two men reconciled. Cunningham, who'd gone on to become a public school principal and administrator, eventually supplied a key recommendation to convince the St. Louis Public Schools to hire Muhammad as a community liaison.

Today, Muhammad does the work that Cunningham began, and the cycle continues — moments of heartbreak, moments of hope. Teens like Shawn and Brandon Walker lift their heads out of the water, if only for a moment, only to be consumed by the sea of violence around them. Sometimes they leave prison. Sometimes they go back.

Ask Muhammad about that cycle today, and he doesn't mince words. Change, he explains, rarely happens in an instant.

"That's where people go wrong," he says. "They think they can make people change, but that just causes them to be more resistant and rebellious. All you can do is give them the message, and when you use your own life as an example, that message is, 'If I can change, you can change.'"

Muhammad pauses, considering that message. He adds one more thing: