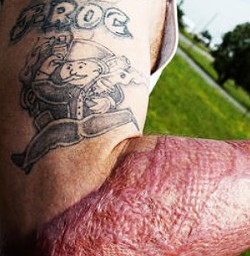 Jennifer Silverberg
A former meth maker shared his story (and his burn) with Riverfront Times in 2010.
The Associated Press this morning followed-up a story the Riverfront Times first reported nearly two years ago, chronicling the toll meth (particularly the "shake and bake" method of producing the drug) is having on hospital burn units.

The AP reports that meth makers account for up to a third of all burn-unit patients in states such as Missouri that rank among the nation's biggest meth-producing states. Most those patients are uninsured and leave owing the hospital an average of $130,000. Those costs -- anywhere from tens to hundreds of millions of dollars annually -- get passed along to taxpayers.

Former RFT staff writer Keegan Hamilton cited similar information back in May 2010 when he wrote:


The region's burn units are struggling to cope with the corresponding influx of patients. Each one racks up approximately $6,000 in treatment per day; stays of up to six months are common. Doctors say unpaid bills, coupled with the labor-intensive care needed to nurse meth-burn victims back to health, are sapping their resources.

"There's not a good workers'-comp plan with drug manufacturing," quips Dr. Jeffrey Guy, director of the Vanderbilt Regional Burn Center in Nashville. "They're never insured. The costs of their treatment just get passed on to society. People who live in affluent areas, when these people blow themselves up they tend to say, 'Oh well, it's one less drug addict.' That couldn't be further from the truth."

In recent years the Missouri legislature has rejected proposals to ban the over-the-counter sale of meth's key ingredient -- pseudoephedrine. Such a ban could have a drastic impact on the number of burn victims and Missouri's distinction as the Meth Making Capital of America. But then, such a ban would also require legislators to burn their relationship with the pharmaceutical lobby, which last year ran radio ads in Missouri warning residents that their easy access to Sudafed, Claritan D (and other forms of pseudopehedrine) could be taken away.