Send a News Tip
Blame facebook, Twittter, Likeme.net, Myspace and all the rest. 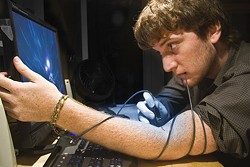 flickr.com/photos/theeponymousone
Are you addicted to the Internet? Your family knows.
The social media sites -- all the rage of the Internet the past few years -- are eating into the time families spend together, according to a new survey from the Annenberg Center for the Digital Future.

The University of Southern California institution reports this month that 28 percent of Americans it interviewed last year said they have been spending less time with members of their households. That's three times the number of people who said that in 2006.

And social networking sites seem to be one of the main culprits -- especially with men. According to the Annenberg survey one in seven Internet users who visit online communities, such as Facebook, said their online activities are reducing their involvement with offline counterparts "at least somewhat," a response reported by three times as many males (21.5 percent compared to 7.3 percent of females).

So how 'bout you? Are you spending less time with "the fam" now that you're twittering away the days? And is your significant other getting jealous?