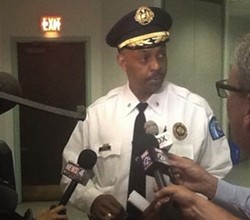 After an incredibly violent Monday night in St. Louis, metro police officers were busy again yesterday evening responding to several dangerous calls from the streets. One cop faced a hail of bullets from a driver at around the same time that another cop, in a separate incident, was injured in a police-chase crash.

The St. Louis Metropolitan Police Department says that at 9:22 p.m., a special operations commander tried to pull over a black Pontiac Bonneville with temporary tags -- whose driver proceeded to fire shots at the 52-year-old officer. He called for backup to the 4200 block of West Evans Avenue in the Vandeventer neighborhood.

And a cop on his way to help this officer incidentally got caught up in a separate police chase that resulted in injuries.

Police are still investigating the confusing sequence of events, but here's what we know, as of this writing.

In the first Evans Avenue incident, the commander who apparently faced fifteen to twenty bullets in his car, was not injured. A witness observed the suspect escape into a residence on that block, and eventually cops arrested three male residents. They also recovered three handguns.

via Google Maps
Evans Avenue, where an officer faced bullets.

The black Pontiac Bonneville that had originally fired shots at the officer was found abandoned in an alley on Cook Avenue nearby.

Meanwhile, a cop on his way to help this officer apparently attempted to stop a different vehicle that matched the description of a stolen car at 14th Street and Washington Avenue. That vehicle, however, fled from the cop. 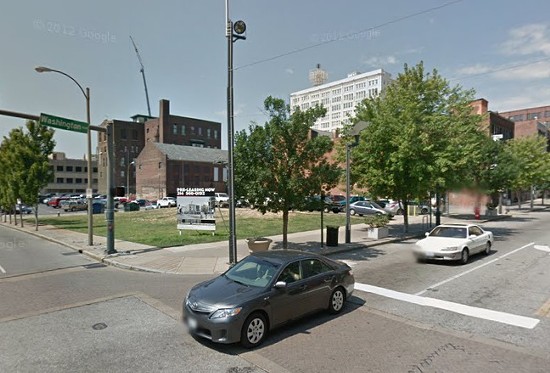 via Google Maps
14th and Washington where the crash took place.

Moments later, this car crashed into a 9th District cop car at Compton Avenue and Washington Boulevard. A third officer in this car, also responding to an aid call, was seriously injured:

9th District PO injured in vehicle crash @ Compton & Washington tonight. He was responding to an aide call. Officer is in serious condition

That suspect involved in the crash also went to the hospital -- but, police say, somehow managed to flee.

It appears that police know his identity and are searching for this suspect. An SLMPD spokeswoman tells us this afternoon that the department has no new information to offer on whether he has been apprehended or if charges have been issued.

No new word on the condition of the injured officer.

This busy and seemingly very stressful night for the department comes after an evening that involved seven shootings with seventeen injuries, in addition to a violent stabbing.

. @slmpd thanks everyone for their concerns and prayers for our injured officer. We appreciate the support. #SLMPDStrong

And here are the two incident reports from SLMPD.

Incident: Assault 1st
Location: 4200 block of W. Evans
Date/Time: 06/11/13 @ 9:22 p.m.
Victim: 52-year old white male -St. Louis Police Officer
Suspect: Black male
At approximately 9:22 pm, a Special Operations Commander observed a vehicle and made a u-turn, activated his lights and siren on his unmarked Chevrolet Impala and attempted to conduct a car stop on a black Pontiac Bonneville with temporary tags; however the vehicle sped away. As the commander followed the vehicle's path, he was shot at by the driver of the vehicle. An "Officer in Need of Aid" was initiated at this time. A witness advised police that the suspect who shot at the commander fled into a residence in the 4200 block of W. Evans. Three handguns were recovered from that residence, and three males were arrested from inside. The black Pontiac Bonneville was located abandoned in the south alley of the 4200 block of Cook. No injuries were reported. The investigation is ongoing.

Incident: Felony Fleeing Location: Hebert & N. Florissant Date/Time: 06/11/13 @ 9:20 p.m. Suspect: Black male An officer observed a vehicle that matched the description of a vehicle wanted for a robbery. The officer attempted to curb the white Volkswagen south on 14th approaching Washington. The vehicle fled going west on Washington at a high rate of speed. The officer disengaged and was responding to the Officer in Need of Aid call involving shots fired at W. Evan and Whittier. Moments later, the Volkswagen was involved in an accident with a 9th District vehicle at Compton and Washington. The investigation is ongoing.