The shooter who stormed Central Visual and Performing Arts High School on Monday had over 600 rounds of ammunition and wrote in a manifesto that his life was “a perfect storm for a mass shooting.”

St. Louis Police Interim Police Commissioner Mike Sack read briefly from the so-called manifesto at a press briefing Tuesday and showed photos of the weapon used by the 19-year-old, who police say is responsible for yesterday's school shooting in south St. Louis.

Sack said that the manifesto was recovered from Harris' car.

"Six hundred rounds is a lot of ammunition," said Sack. "This could have been a horrific scene, but it wasn't by the grace of God."

Police say Harris, 19, graduated from Central VPA last year. The magnet school at Kingshighway and Arsenal shares a building with the Collegiate School of Medicine and Bioscience.

More than 100 children in the St. Louis area have been killed by gun violence in the past four years, according to the Eastern District of Missouri. White House Press Secretary Karine Jean-Pierre called for an assault weapons ban on Tuesday in response to yesterday’s shooting in St. Louis. 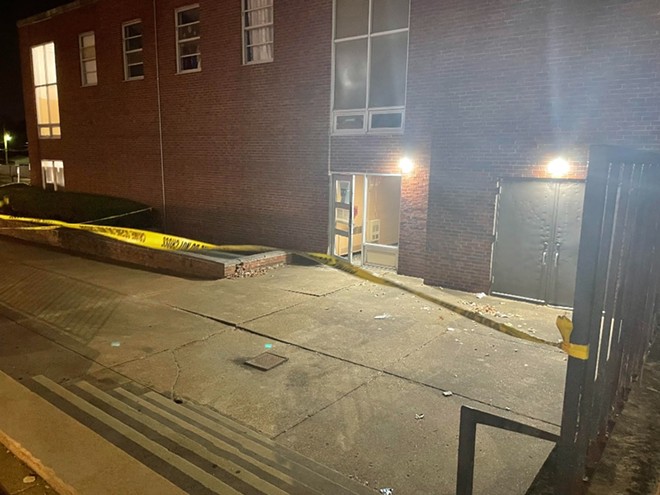 Benjamin Simon
A smashed door outside of Central VPA High School
St. Louis Mayor Tishaura Jones spoke after Sack, saying, "Let me be absolutely clear: The scourge of gun violence that continues to claim the lives of our children and families in their communities is a national emergency."

Jones also spoke of the ways in which yesterday's shooting impacted her own school-aged son.

"I honestly felt like the safest place and, and the best place, for him to be today was to be back in school," she said. "To be with school counselors who will be there to help him process, his teachers who care about him and staff who care about him."