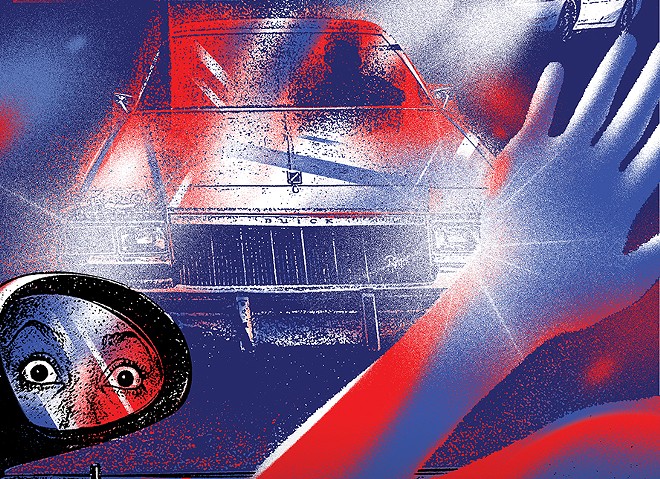 On the night of May 5, Aaron Piggee had a normal phone call with his mother.

They talked briefly about what she planned to cook for Mother's Day. His mother, Anngelique Simmons, loved to cook, Piggee says, and she loved her grandkids. She asked how his 15-year-old daughter, Anniyasha Wallace, was doing in school.

Simmons planned to go to the grocery store to pick up supplies for the holiday. "She always cooks on Mother's Day," Piggee says.

The next day, Simmons along with two of Piggee's uncles, his sister, Anniyasha and two of his young nieces set out to the grocery store in the family's Kia Sedona.

Officers with the anti-crime unit were already in the area. The unit travels in covert vehicles to recover stolen vehicles used in violent crimes.

The driver of the Jeep obeyed a traffic signal and waited at a light to turn east off Union onto Delmar at 9:20 p.m.

Inside the Jeep were three teenagers, the eldest 18. Behind them lurked three or four covert anti-crime vehicles, according to Lieutenant John Green.

When the stolen Jeep turned east onto Delmar, the anti-crime unit followed. The stolen Jeep suddenly changed lanes and sideswiped a nearby vehicle unassociated with police. That vehicle started chase to take down its plates but retreated after a passenger of the Jeep fired a gunshot at the driver. The Jeep sped away.

"By that time, [the anti-crime unit] had radioed in that they were behind the vehicle and gave a direction of where it was last seen," Green says. "The Jeep took off at a high speed, and they couldn't keep up."

Police officials would later say they weren't chasing the stolen Jeep but that they had deployed spike strips near Taylor Avenue and Delmar to try and flatten its tires. The alleged driver of the Jeep, 18-year-old Marshawn Stepney, drove over the strips around 9:23 p.m. 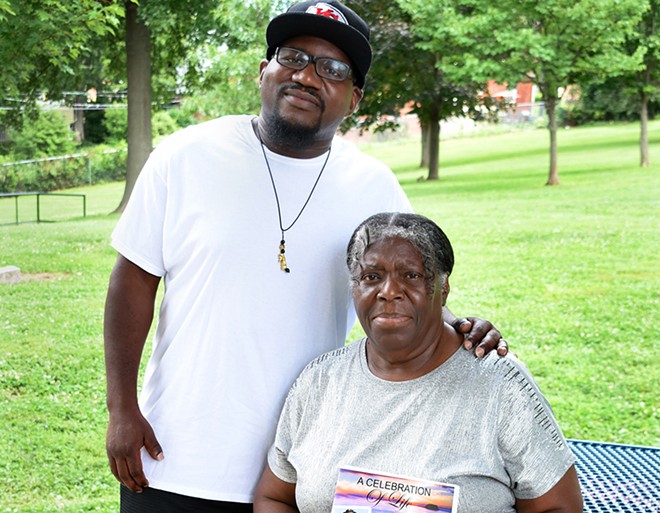 MONICA OBRADOVIC
Aaron Piggee and his grandmother Elinor Simmons lost five family members in a car crash in early May.

Five of the seven people in the minivan perished.

The blow killed Piggee's mother, who was pronounced dead at a hospital. Piggee's aunt, LaRhonda Simmons; and his uncles, Ephraim "Wayne" Simmons and Luther Simmons, were pronounced dead at the scene. His niece, 11-year-old Takera Thomson, died three days later.

"It's just hard to digest that they're gone," Elinor Simmons, Piggee's grandmother, said in an interview with the RFT two months after the crash. She'd lost three of her six children, a granddaughter and a great-granddaughter. "Even after I got the death certificate, I cried three times that day. And the next day, I cried three times. I'm tired of crying."

Piggee drove to Barnes-Jewish hospital around 5 a.m. His brother had called and said, "Mom got into a bad accident" but wouldn't say more over the phone. But when Piggee found his family in a hospital waiting room, he instantly knew something was seriously wrong.

At the hospital, Elinor Simmons told him his Uncle Wayne, Uncle Luther and his sister were "down on the morgue table as we speak." Doctors were trying to resuscitate his mother, and his daughter waited in another room for surgery.

"When I first heard the news I literally broke down," Piggee recalls to the RFT. At first, he thought everyone in the car had died. "You're going to tell me I lost my two uncles, my mom, my sister, my two nieces, and my daughter? No, no."

Piggee's niece, 8-year-old Trinity Thompson, sustained injuries but survived. So did his daughter, Anniyasha, who had broken a bone in her lower left leg and is recovering from a surgery that replaced the bone with a metal bar.

Days after an initial shock set in, and after the anger that soon followed dissipated, Piggee realized the tragedy that befell his family was not a rare instance but rather the latest in a recent pattern of suspects fleeing from police and harming innocent motorists in the process.

"This is not only happening to my family, this keeps happening everywhere," Piggee says.