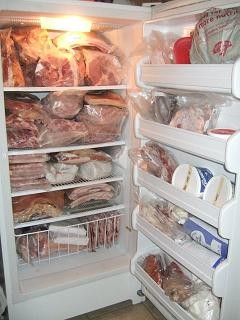 Tavis Doyle got a deep freeze of his own yesterday.
An East St. Louis drug dealer accused of placing frozen meat in the pants of an overdose victim instead of calling for an ambulance was sentenced to life in prison yesterday.

Tavis Doyle, 43, was convicted in federal court in February of distribution of heroin resulting in death. The crime carried a mandatory life sentence. At his sentencing yesterday, Doyle also received concurrent sentences of 60 years for distribution of a controlled substance to a person under the age of 21 and 20 years for maintaining drug-involved premises.

According to prosecutors, Doyle sold heroin to 30-year-old Jonathan "J.J." Ward on May 28, 2009, at a crack house that Doyle maintained on Walter Street in East St. Louis. Ward, of Effingham, Illinois, was pronounced "dead on arrival" at Barnes Hospital the next day.

Witnesses testified that Doyle had refused to allow anyone at his residence to call 9-1-1 when Ward collapsed. Instead, Doyle attempted (unsuccessfully) to revive Ward by placing frozen meat in Ward's pants. Doyle then insisted for several hours that Ward "just needed to sleep it off."

Acquaintances of Ward eventually transported him to Barnes Hospital, approximately twelve hours after Ward's collapse. In addition, according to witnesses who testified at trial, Doyle provided copious quantities of crack to a seventeen-year-old female runaway from rural Kentucky who lived with Doyle during the summer and fall of 2008.

"Heroin distributors, such as Mr. Doyle, are no better than cold-blooded murders. Mr. Doyle's actions reflect this fact and his sentence properly punishes his actions. My office will continue to pursue the distributors of illegal drugs and to bring them to justice for their crimes." said United States Attorney Stephen Wigginton. "I have said in many places, at many events, that drug dealers are on notice -- the poison you dispense kills people. You will be held responsible for your actions, even if you do not intend to kill. If convicted, your punishment will be severe, as Mr. Doyle has discovered."