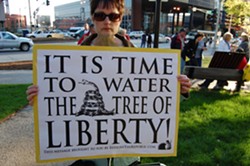 A coalition of Tea Party groups plan to picket tomorrow in Sunset Hills near the Republican Party's St. Louis headquarters.

The groups say they're protesting Minnesota Congresswoman Michelle Bachmann's decision to come to Missouri to stump for Senate candidate Roy Blunt. Bachmann is seen as something of a Tea Party hero. Meanwhile, local Tea Party groups says Blunt is anything but -- having aligned himself with big government principles like TARP and Cash for Clunkers.

The demonstration gets way at 10:30 a.m. tomorrow morning near Watson and Lindbergh. Curiously -- perhaps -- St. Louis Tea Party founder Bill Hennessey and his group have not embraced their fellow Missouri "patriots" on this issue. The St. Louis Tea Party is noticeably absent from a petition signed by 28 other state Tea Party groups this week that are opposed to Bachmann's endorsement of Blunt. As Hennessey told stltoday.com earlier this week:

We decided a long time ago not to endorse candidates in the primary. That means we don't un-endorse, either. The Tea Party, being totally decentralized, represents a lot of ideas and opinions. We love that.

Whatever the case, let's hope that the out-state Tea Party protesters steal a page from the St. Louis Tea Party's playbook tomorrow and brings a coffin to the event. That would be awesome.