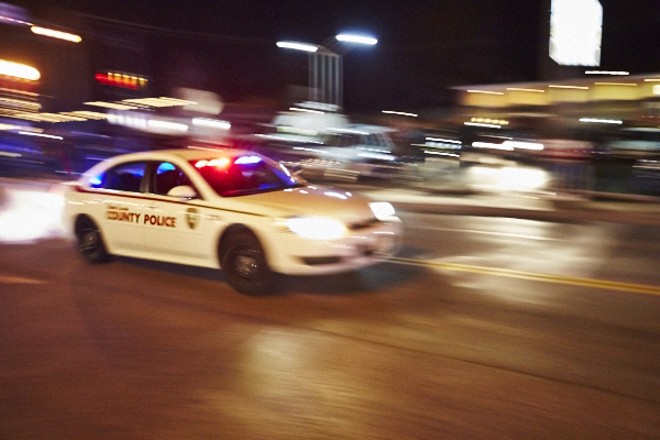 On a night of protests in Ferguson and Richmond Heights, police launched tear gas and arrested nine people.

The day started in Clayton with an afternoon rally in response to the killing of George Floyd by police in Minneapolis. There were peaceful marches through the streets before a second gathering in the evening outside the Ferguson Police Department headquarters. That too was peaceful for several hours.

St. Louis County police joined Ferguson police there, and authorities say some of the people who were outside the building about 9 p.m. threw rocks and shot fireworks at police lines. Someone threw a molotov cocktail at a police car, police say. Two officers  — one hit by a rock, one burned by fireworks — suffered minor injuries.  Earlier in the day, Ferguson Mayor James Knowles III had ordered an 8 p.m. curfew following vandalism on Saturday night to the police station and nearby businesses.

More businesses were hit on Sunday night, including Ferguson Brewing, which had windows smashed. In a Facebook post, the brewery described the frustration of seeing the business damaged but also the kindness of people who stepped in almost immediately to help clean up the broken glass.

"As upset, tired, helpless, and sad as I am; there are people in the community that are literally cleaning up the pieces and boarding up the windows as I’m posting this. That’s what #Ferguson is about," the post said.

The brewery added that they suspected the damage wasn't done by anyone from the neighborhood. That's been a common theme as elected officials and people involved in the protests have criticized some of those taking hammers and rocks to buildings and setting fires.

"Folks walked peacefully through Clayton in the daylight without incident," state Rep. Raychel Proudie, D-Ferguson, tweeted. "Many of those same folks came here to Ferguson and proceeded to tear it up."

Folks walked peacefully through Clayton in the daylight without incident. Many of those same folks came here to Ferguson and Proceeded to tear it up. By no means and I saying to do the same in Clayton, but its interesting how folks view and treat Black spaces ☕️


KSDK filmed one protester the night before confronting a black-clad man trying to light a fire at Vincenzo's Italian Ristorante, telling him "not in my community."

MOMENTS AGO one man stopped another who looked like he was trying to start a fire outside a restaurant in Ferguson, Mo. near the already-damaged police department. “Not in my community.”@ksdknews is live with @CaseyNolen @MorganYoungKSDK and Robert Townsend. pic.twitter.com/c1W6EXTErQ

St. Louis County police say they made six arrests, while Ferguson police said their officers made three on Sunday night into Monday morning.

The St. Louis Post-Dispatch reported that protesters moved at one point in the night to Richmond Heights, where three people were arrested after shooting fireworks.

More protests are planned today, starting at 3:30 p.m. in front of the City of St. Louis Justice Center on Tucker Boulevard.