Send a News Tip
Terry Mills, the Missouri state trooper whose undercover work led to the biggest dogfighting bust in American history, is taking his show on the road. 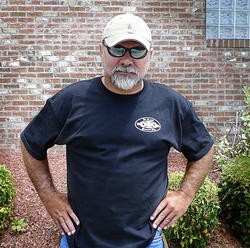 Keegan Hamilton
Terry Mills
We're not talking about a book deal or the lecture circuit, mind you. This dude is a badass! And so he's going to keep busting the bad guys -- only instead of working for the state highway patrol (where he worked for more than 30 years), he's going to do it for the ASPCA, or American Society for the Prevention of Cruelty to Animals.

As Keegan Hamilton detailed in his feature story earlier this year, "Dog Beat Dog," Mills spent eighteen months undercover, penetrating an underground dogfighting ring that stretched across eight states. His work led to the seizure of more than 500 pit bulls and the arrests of 26 human participants.

As the ASPCA's Emily Schneider explains, Mills will be serving as "Animal Fighting Specialist" -- providing training and support to law enforcement agencies as they do similar investigations.

The agency's Field Investigation and Response Team, which Mills be a part of, has been around for awhile. But Mills' position is all new. Schneider says the ASPCA got to know Mils while working with him on the Missouri dogfighting case; they subsequently hired him to assist with a cockfighting case in Florida that involved the seizure of 650 (!) fighting roosters.

This week, he's in Memphis, training law enforcement there.

"What Terry's going to be doing isn't just working on investigations," she says. "Law enforcement can use him as a resource to prevent and detect animal fighting. We're very excited to have him on our team."

As Hamilton reported in his story,

The ASPCA estimates that roughly 40,000 professional dogfighters are operating in the United States. The Humane Society of the United States says pit bulls and pit bull mixes comprise a third of all dog intake at animal shelters nationwide; in some urban areas the figure is as high as 70 percent. At the same time, the two nonprofits contend, law-enforcement agencies both local and federal are reluctant to devote resources to an offense that doesn't affect humans and involves insular criminal networks that are difficult to infiltrate.

In light of that reluctance, it's nice to see the ASPCA taking matters into its own hands and providing a real resource to local law enforcement agencies.

And for those of us in Missouri, who knew Terry Mills when -- or, let's be honest, felt like we knew him when after reading "Dog Eat Dog" -- we can be proud that he'll be using his expertise to stop animal cruelty on the national level. That's pretty cool indeed.