That Couldn't Possibly Work In St. Louis, Could It? 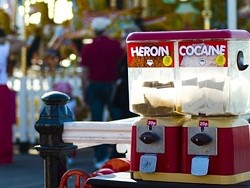 blameitonthevoices.com
Seattle Police are taking a more relaxed approach to drug laws...
St. Louis police prefer to wage the war on drugs the old fashioned way. Coke dealers on the Northside? Root 'em out, round 'em up, make a few arrests, and confiscate some dope for the TV cameras.

Meanwhile in Seattle, law enforcement officials have had enough of the "vicious cycle of arrest, prosecution of and incarceration" and are trying a different approach (via the Seattle Times):

Confronted with photos, video clips and binders full of evidence gathered in a year-long operation along Seattle's 23rd Avenue corridor, from Madison to Jackson streets, [more than a dozen drug] dealers were promised they wouldn't be arrested, prosecuted or sent to jail for 20 months or more if they embraced the job training, educational opportunities, housing assistance and chemical-dependency treatment being offered them.

Should they break the bargain by selling drugs anywhere in King County, the dealers were told, they'd feel the full force of the law.

"The community here cares about you but will no longer tolerate drug dealing in their neighborhoods," said Interim Seattle Police Chief John Diaz. "This isn't a joke, and it isn't a threat."

At a Friday morning news conference at Seattle Police headquarters, Diaz acknowledged, "There's a risk in doing this," but said it's time to try something different to eliminate street-level drug dealing in the city.

"We've done sweeps, we've done undercover buys and crackdowns, and we're still not getting a handle on drug dealing in our neighborhoods," he said. "We're trying to change the culture and the norms in the neighborhood."

As a Seattle to St. Louis transplant, I'll be the first to admit that the differences between the drug problems in the two cities is admittedly huge but...
...you're telling me this idea couldn't work (at least to start) in a small, working-class St. Louis neighborhood like Baden?
The "corridor" to which the Seattle Times article is referring is one of the few (we're talking three, tops) stretches of Seattle where open-air drug dealing is a problem. In St. Louis, it seems like it's roughly half of the city. That doesn't necessarily mean the approach couldn't work here. The Federal Government is even willing to pay for it.

The program is based on one implemented in High Point, N.C., in 2004 by police and David Kennedy, a criminologist at the John Jay College of Criminal Justice in New York City. Five years later, the city has virtually no remaining public drug dealing, and violent crime has fallen 20 percent citywide, according to the college's Web site.

Kennedy, who visited Seattle in June, spent two days in private meetings with law-enforcement officials, city leaders and pastors and activists from Seattle's black community. His model, which is being replicated in places like Milwaukee; Nashville, Tenn.; Chicago; and Indianapolis, is being backed by the U.S. Department of Justice, which awards federal grants to train local officials on how to establish programs.

The Seattle police also point out they're still trying to lock up the drug kingpins and targeting the teens at the bottom of the drug totem pole (the "hoppers" in Wire parlance.) A follow-up article published in the Times two days later shows they already made an example out of one of the punks. Time will tell how effective it really is.
So how 'bout it Chief Isom? It's not like we're asking for Hamsterdam.