That Was Fast: Jim Edmonds Retiring From Baseball 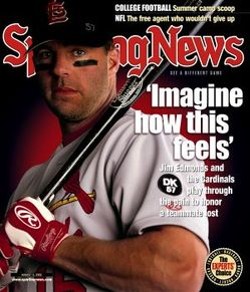 The 40-year-old player who delighted Redbird faithful with his spectacular center-field catches during his 2000-2007 stint with the club,  told team doctors today that an Achilles tendon pull suffered last season was too painful for him to continue.

After sitting out the 2009 season, Edmonds returned to baseball last year to play for the Milwaukee Brewers and Cincinnati Reds and hit .276 in limited play.