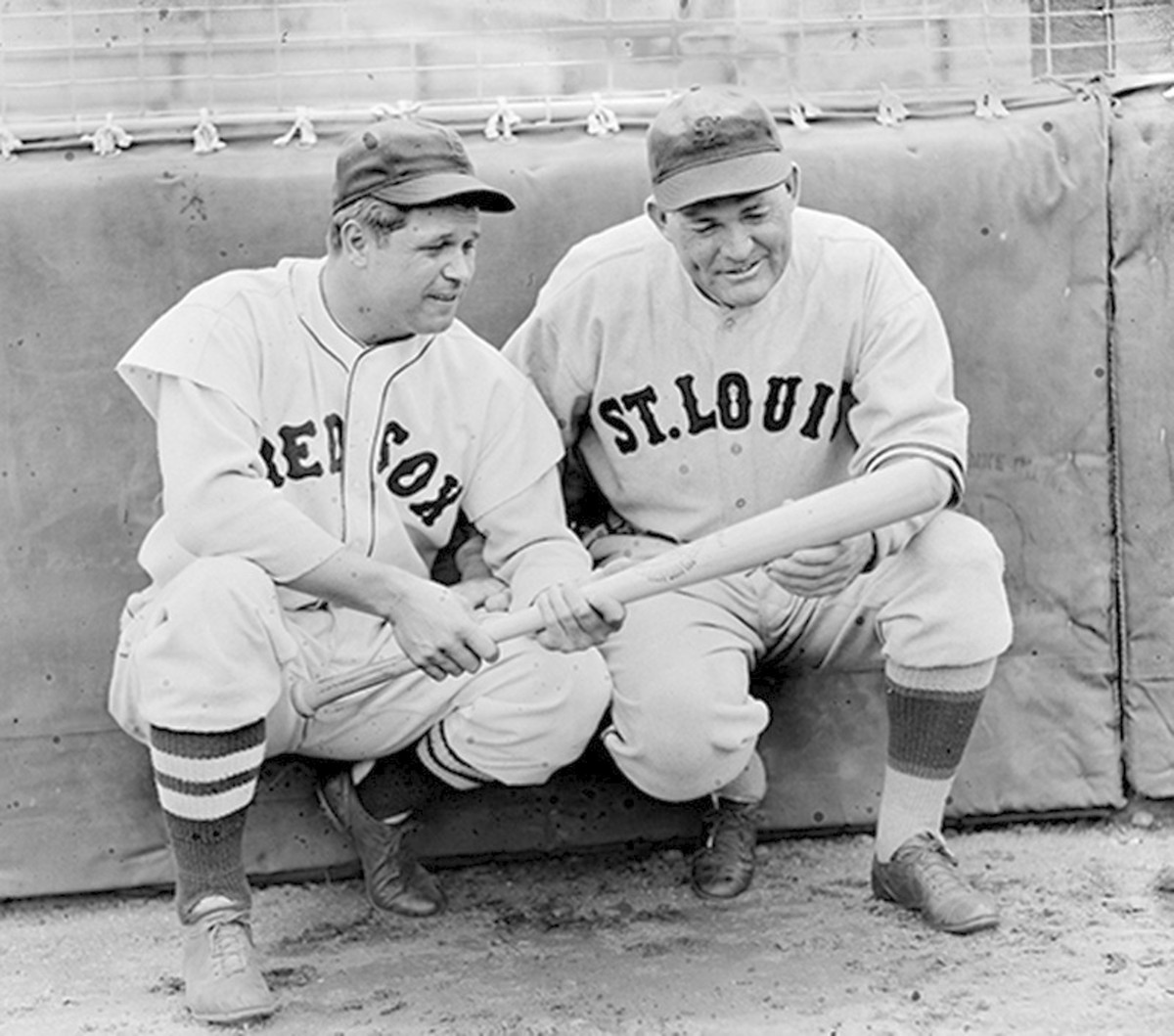 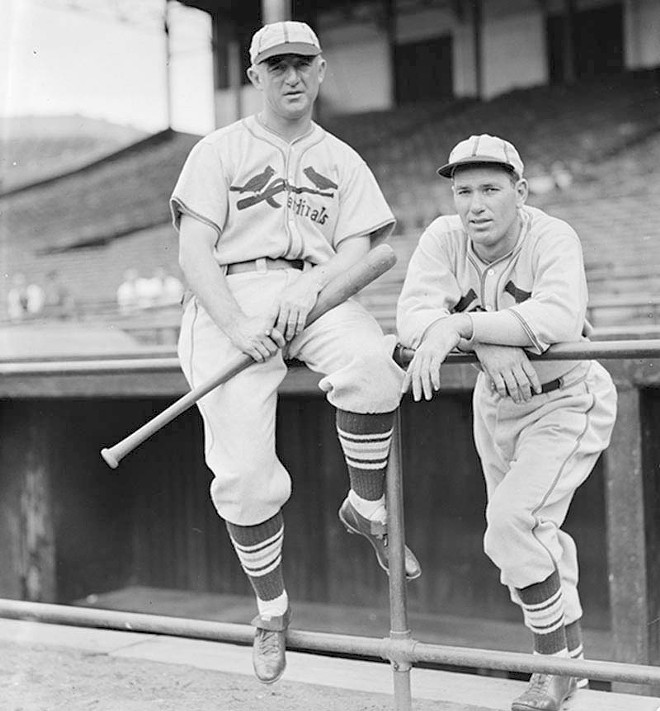 Winning 32 games, with 30 of them in the regular season, Dean was the National League's Most Valuable Player as he pitched the Cardinals to the pennant and a World Series win over the Tigers in 1934. He also led the league in braggadocio many times, but he frequently made good on his boasts. He won 120 games in five full seasons in St. Louis, but in the 1937 All-Star game he suffered a broken toe and never fully recovered. Traded to the Cubs in 1938, he won only 24 games the rest of the way. He was elected into the Hall of Fame in 1953.

Called "The Fordham Flash" because of his college background, Frisch never played in the minor leagues. Fiery on the field and a disciplinarian as a manager, Frisch had his impish moments. Paying the league office a $25 fine, he enclosed a note that said: "(Buy) your umpires new caps. They now look like Civil War veterans."

Traded to the Cardinals for Rogers Hornsby thanks to his snit with John McGraw, the manager of the New York Giants, Frisch finished his career in St. Louis. He batted .312 for the Cardinals, who won four pennants and two World Series during his stay. In 1934, when the Red Birds defeated the Tigers in the fall, Frisch, nearing 36, hit .305 and managed the team as well. He was voted into the Hall of Fame in 1947. 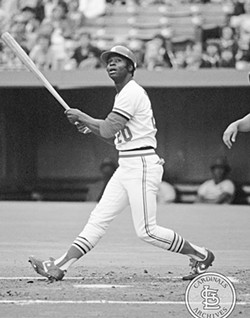 On June 14, 1964, the Cardinals were tied for seventh place and the Cubs were sixth (no divisional play then). The two teams made a six-player trade, headlined by Ernie Broglio going to Chicago and Lou Brock coming to St. Louis. Broglio had won 60 games in the four previous seasons, but had a sore arm that he kept to himself. After the trade, he won seven more games in the following two and a half years and retired from the game. Brock was the linchpin as the Cardinals won the 1964 World Series.

The Cardinals won two more pennants and one World Series with Brock in the lineup. He hit .297 as a Cardinal, stole 888 bases and became a Hall of Famer in 1985. Long-of-tooth Cub fans still use him as a poster boy for hating the Cardinals. 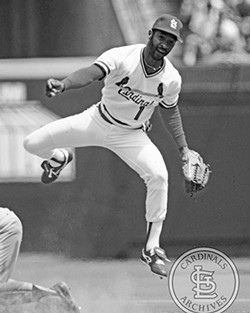 In August 1981, the crowd in St. Louis booed their shortstop, Garry Templeton, who responded with obscene gestures. An umpire threw Templeton out of the game, and when his manager, Whitey Herzog, lectured him in the dugout, coaches and other players had to keep them from fighting. Needless to say, that was the end of Templeton's turbulent six-year run as a Cardinal. In San Diego, the struggling Padres had a good-field, no-hit shortstop, and before the 1982 season began, Ozzie Smith was a Cardinal and Templeton a Padre.

Templeton went to the World Series with the Padres in 1984, but in St. Louis, Smith sparkplugged the Cardinals to three pennants and one World Series title. Smith won 11 straight Gold Gloves for his fielding wizardry, became a better hitter than he'd been in San Diego and in 2001, garnering 91 percent of the vote, cakewalked into the Hall of Fame. 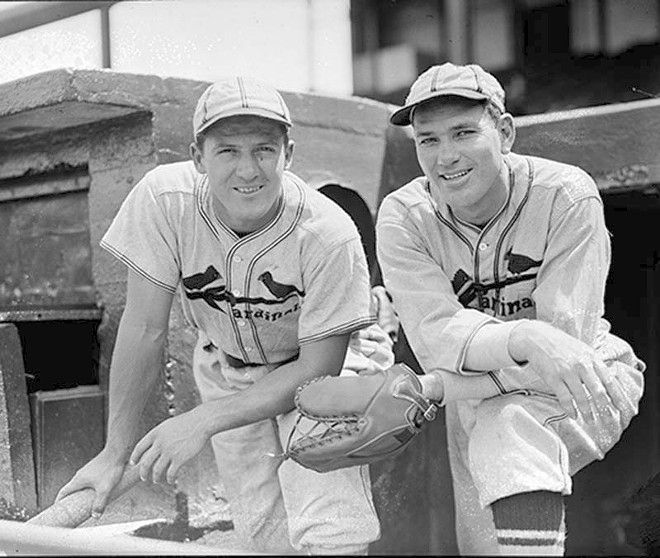 In the mid-1970s, I chaired a testimonial dinner in Pittsburgh for Pie Traynor, the Pirates' Hall of Fame third baseman. We invited every living Hall of Famer, and—gulp!—Ray Schalk, who had died in 1970. Medwick came from St. Louis, but as we left the cocktail party just before the dinner, he came up to me and demanded a check, on the spot, for his traveling expenses. "I've been to a lot of these deals," Medwick said, "and I'm not gonna get stiffed again." More than twenty years after he played his last game, Medwick was still hanging tough.

In Detroit in 1934, Medwick had been removed from a World Series game by the commissioner of baseball for fear he might incite a riot. But Medwick's bluster was no blarney. He battled his way to seven straight .300 seasons in St. Louis, leading the league at .374 in 1937. He batted .379 in the '34 Series. Yet it was decades before Medwick became a Hall of Famer. "I feel like I just ended a twenty-year slump," he said after the voters finally smiled on him. 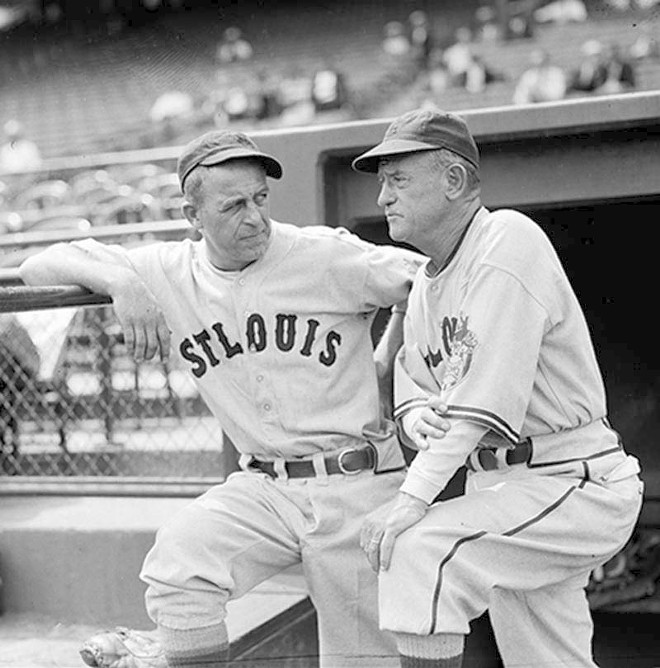 Despite playing on four of the Cardinals' World Series teams, a career average of .310, 94 or more runs batted in for nine seasons and a reputation as a smooth-fielding first baseman, the even-tempered Bottomley wasn't enshrined in the Hall of Fame until 1974, a quarter of a century after his death. They didn't call him "Sunny Jim" for nothing; the fire in his belly was seldom on display, but surely it existed. "Bottomley was the best clutch hitter I ever saw," Frankie Frisch said.

Even when Bottomley was playing in the minor leagues, Branch Rickey of the Cardinals knew what he had. With Bottomley in the wings, Rickey traded Jack Fournier, an established hitter, to Brooklyn. Bottomley took over the bag full-time in 1923 and stayed there for ten years.