The Bachelor: Inside a Reality TV Casting Call 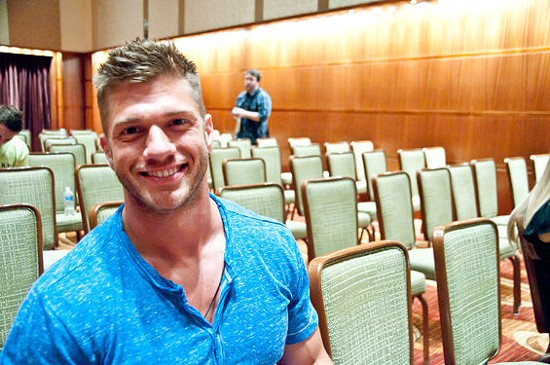 Caroline Yoo
The area's most eligible eye candy auditioned for The Bachelor this past weekend.

Love was in the air Friday afternoon on the sixth floor of the Four Seasons Hotel, where a total of 208 single ladies and gents auditioned for the upcoming season of The Bachelor and The Bachelorette -- 209 of them to be exact, if you include a painfully out-of-place Daily RFT writer.

The St. Louis casting call was part of the producers' nationwide search for men and women "ready to find true love" on future seasons of both shows. Despite the fact that very few bachelors and bachelorettes attain happily-ever-after endings, most of the contestants I met -- drawn from Missouri, Illinois and even as far away as Arkansas -- told me yes, they are ready to try anything, even reality television, to find love. 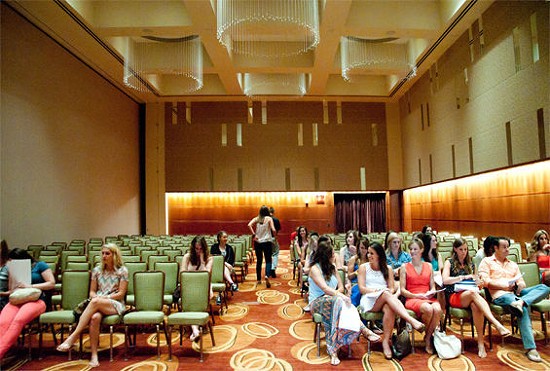 Caroline Yoo
Like most auditions, The Bachelor's casting call involved lots of waiting around.

Though the audition wasn't officially scheduled to start until for 4 p.m., twenty or so well-dressed men and women were already scattered about the sixth floor ballroom, filling out forms and quietly chatting, when I arrived at 3:30 p.m. A couple of production assistants greeted me and handed me a packet of forms to read through and sign, and cheerily instructed me to sit in a chair on the left side of the room.

Let's talk about those forms for a moment: It turns out that finding true love requires quite a bit of paperwork. The six-page contestant questionnaire is available to download off the show's website, but it didn't appear that many people knew that. Two dozen auditioners were hunched over their laps or seated at tables, scribbling their hopes, wants, dating histories and dreams with ballpoint pens. The result was that the scene inside the ballroom looked a high school prom crossed with the SATs. 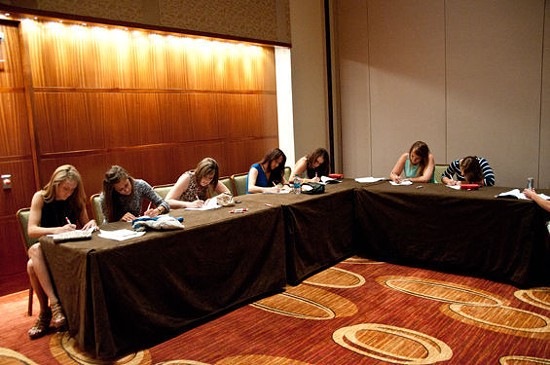 Caroline Yoo
Alas, cheating off someone else's paper won't help your chances on this test. Probably.

Ever the Boy Scout, I had taken the time to prepare my answers, fashioning a dating profile that, I felt, fairly and accurately represented my romantic goals for The Bachelor.

I confess I may have been suffering from hunger-related delusions while coming up with some of my answers.

After signing the legal contracts, I returned to the producers at the ballroom entrance and handed in my questionnaire, which was added to a stack. One producer then walked me near the balcony window to snap some closeup and body-length photos, and then instructed me to sit on the right side of the ballroom and wait to be called for the individual interviews.

I found a seat next to a tan, athletically built man in a powder blue T-shirt and dark jeans. He introduced himself as Ryan, a 30-year-old traveling salesman from Springfield.

"I've been very busy with a job and career. It's a very busy job, I play baseball, I work out, I own a house, but it's tough to just go and find women," he says. He's a big fan of The Bachelor, and says he knows what the show is (and isn't) looking for in a male contestant. "Some people are hesitant. But a couple seasons ago, the guy, you could tell he was ready. I think that's what they're looking for. A guy who knows what he wants and is willing to take that step if he meets the right one." 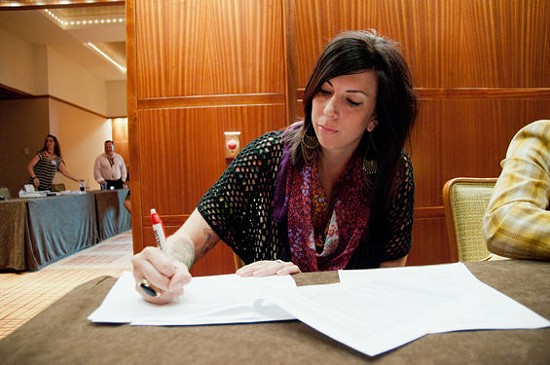 Every ten minutes or so, a producer walks in to call the next four people to the back rooms for the interviews. It's not long before Ryan and I are sitting at the front row along with two women from St. Louis, Christina and Megan. Both are disillusioned veterans of the local dating scene.

"On my 30th birthday I got a picture of a penis from a guy I don't know," laughs Megan, a blonde in a light orange dress. She and Christina had seen promos for the local audition and decided to go together. "So I thought, 'Why not?' This must me better than online dating."

"You always watch the show and it looks like so much fun, you think 'I wish I could do that,'" agrees Christina, a brunette 35-year-old project manager for a construction contractor. "Well, I could do that. There's nothing to say it couldn't be. But you still have to put yourself out there and do it."

"People are looking to hook up," bemoans Megan, describing the state of dating culture in the real world. "It's hard to find people that really want the same thing you do, a relationship, someone to spend time with."

A few minutes later a producer walked in, pointed at Ryan, Megan, Christina and me, and lead us out of the ballroom for the actual casting call.

Continue for the thrilling conclusion to Daily RFT's reality-show audition.