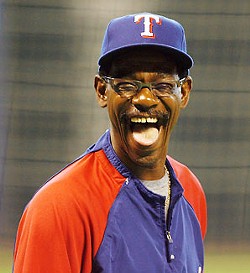 Washington may not be much of a motivational speaker (the Rangers went on to easily fold by a score of 2-6 and lose the series), but he can always find work as a blue comedian.

Here are a few choice excerpts:

Washington on Chris Carpenter: "They think because they're pitching Carpenter their ass is fucking okay. I just came out of that fucking press conference and all they want to fucking talk about is Carpenter. And you know what I said? Fuck, Carp. ...Those cocksucker asked me if I thought we were going to work his fucking pitch count because he's on three days rest. You know what I told those cocksuckers? If he pitches balls and all across the plate we're, going to knock the shit of of them. That's what I told them. I said shit. [Laughter from players.] I swear that's what I told them. We're not going up there to fucking build his pitch count up. So I just wanted to give you that tip."

Washington channeling the Three Musketeers: "Remember: All for one and one for all. And you got that attitude right there there's a a lot of motherfucking strength."