What will happen to St. Louis' Little Bosnia when it's not so Bosnian?

The Bevo Mill, reborn as Das Bevo, reopened in May. DOYLE MURPHY 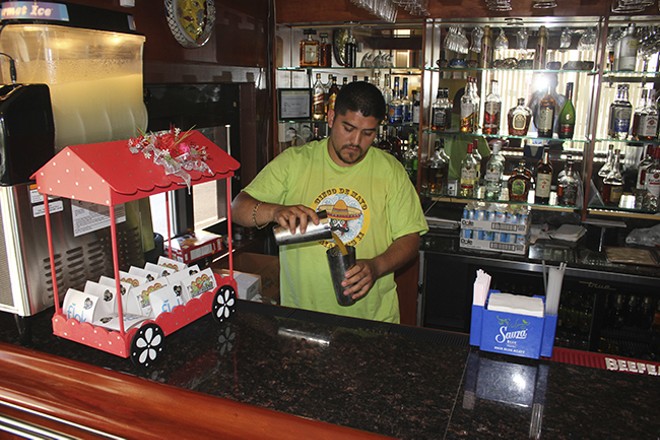 Mariachi's II opened five years ago in the heart of Little Bosnia.

"It was kind of a risk," says Fredy Guijosa, whose family owns the Mexican restaurant. "For one, it was Bosnia Town, as you can see. We really didn't think we were going to be as successful as we have been."

The fact that there weren't any other Mexican restaurants nearby seemed a little scary, but to Guijosa, it was also a bonus. Instead of trying to battle it out with a half-dozen spots on Cherokee Street, Mariachi's was able to tap into a crowd of margarita-drinking customers all the way to Fenton. They also got a lot of walk-in business from the neighborhood, which Guijosa says they didn't expect. Their success has not gone unnoticed. Mi Lindo Michoacan opened recently on Gravois to critical acclaim, and a third Mexican restaurant is expected to open across the parking lot from Mariachi's in the vacant home of the former Bosna Gold, a Bosnian restaurant that some believe was the first of its kind in St. Louis.

"I really think they want a piece of the pie," Guijosa says of the sudden influx of competitors.

Bevo still feels wide-open when it comes to new ventures, but businesses such as Mariachi's, which once seemed like islands in a monoculture, are finding they're no longer alone. Laconia Adams says she has seen four or five salons pop up along Gravois since she opened Styles 4 U Salon nearly seven years ago in one of Zanti's buildings on the north end of the strip.

"I cannot complain," she says. "Last year was my best year."

The majority of her clientele is African-American, but Adams says the neighborhood's diversity is what she likes best.

"I've got people that come in with a translator," she says. "They have a picture, and they point, and we make it work."

She has found a communal spirit here. She organized a toy drive with the owners of Gurlly Gurl last Christmas. If her car needs work, she takes it next door to A Plus Auto Care, and when the garage's owner, Dave Ratliff, needs a haircut, he knows to drop in.

"It's a south city neighborhood where we're all trying to make it," says Maximus "Max" Coric, who owns C&C Quality Printing with his father, Mirko "Mike" Coric. The father and son are Croatian-American, a fact you might gather from the flag emblem above the shop door or the massive print of the country's scenic coastline posted inside on an office wall.

The father arrived in 1964, fleeing communism on a journey that took him through the former Yugoslavia and France. He played for the St. Louis Stars soccer team as a younger man and studied mechanical engineering at Washington University. Partially retired at age 77, he drops in at the shop to fill a few orders and banter with his son.

They're explaining the finer points of the geo-politics of the Slavic languages when they start talking over each other.

"As if you would let me," the son shoots back, laughing.

The print shop has been in business since 1981, and Max says they've seen the neighborhood cycle up and down. Each new group of immigrants brings a little of their culture and leaves with a little of others'. C&C does everything from vehicle wraps for businesses to wedding invitations. On this particular afternoon, Max fills a small order for a couple of T-shirts. A young woman has died, and these will be printed with her picture and dates of birth and death.

A four-year-old boy with long braids and a big smile sprints around the shop as his aunt tries to keep up. Partway through the work, Max learns the woman on the shirts is the boy's mother.

Max lifts the little boy onto a table so he can see the machine work. There is a small space on the top of the machine where you can see the print coming through. In this case, it's the mother's smile.

Max finishes the shirts and walks them to the door. "Bye, little man," he says as they go.

DOYLE MURPHY
Amela Okanovic grew up in Bevo and returned to the neighborhood to open a salon.

Even within the neighborhood's traditional Bosnian businesses, cultures have begun to blend together. Erna, Ermin and Senada Grbic recently opened Lemmons by Grbic. The siblings are second-generation restaurateurs, having grown up at the south St. Louis favorite Grbic Restaurant, the city's most famous Bosnian eatery. Their father bought the building three years ago when the old Lemmons folded, with plans for a new venture. Eventually, he instead handed it off to his kids.

They describe the fare as Balkan-American fusion, a mash-up of the traditional dishes they learned from their parents and the typical American meals they ate growing up with friends in south city: flatbread pizza topped with the little sausages called cevapi, chicken wings glazed with a Bosnian brandy called rakija and a version of the old Lemmons' fried chicken with Bosnian spices.

"It's been going over quite well," says Erna Grbic. "I think it's more people don't know what to expect."

Amela Okanovic, 32, grew up in Bevo. Like the Grbics, she had the blended childhood of a younger generation of Bosnians. She graduated from the ROTC program at the old Cleveland High School and was raised by parents who speak Bosnian almost exclusively.

After school, she went to work at a salon in Clayton, but three years ago she returned to Bevo, where she opened Infinity Hair Design on Gravois. She at first depended on her Clayton clients who followed her into south city, but eventually Bosnians began to come, too. Now, her business is a mix — about 60 percent Bosnians and 40 percent everyone else. She thinks all of Bevo will eventually be mixed, too.

Her shop is next to the Heavy Anchor, a bar that attracts a tattooed clientele for cheap PBR specials, metal bands and comedy shows. Okanovic is eager to see more businesses move in all around them.

"I can picture a book store," she says, looking out the window, "or a coffee shop — like an American coffee shop."