The Big Mad: Far-Flung Vaccines, Hawley Overload and Fears of a Zombie Rush 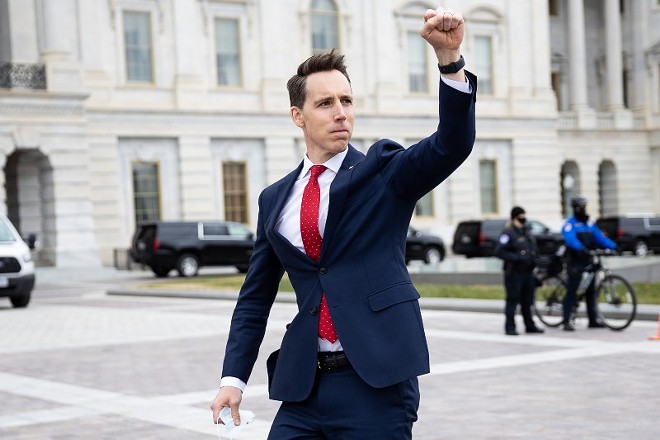 Francis Chung/Courtesy of E&E News and Politico
Sen. Josh Hawley (R-Mo.) gestures toward a crowd of supporters of President Donald Trump gathered outside the U.S. Capitol to protest the certification of President-elect Joe Biden's electoral college victory on Jan. 6, 2021. Some demonstrators later breached security and stormed the Capitol.

It's been two weeks since Missouri-born conservative shit-disturber and red-faced outrage/pill addict Rush Limbaugh shuffled off this mortal coil, and many are still suffering through the shock of the aftermath.

Thousands of rudderless, wandering balls of white-hot anger are simply unsure where to direct their energies now that America's Anchorman is no longer here to tell them, specifically, what it is they are angry about. But fear not: We're here to help.

Welcome to the Big Mad, RFT's weekly roundup of righteous rage. No longer will you need to wonder why you are an absolutely apoplectic asshole all the time; simply take that fury, ascribe it to any or all of the bite-sized bits of bile below, and you'll finally have a plausible explanation for why no one you know can stand to be around you anymore. Simple! Let's dive in.

Vaccines in far-flung lands: Why are we prioritizing vaccine distribution to rural communities where people aren't interested? Last week, nearly 2,000 doses of vaccine made their way to the town of Leopold, Missouri, which only has a population of 65 people, resulting in an open call for willing recipients that saw those in the St. Louis area driving hours to get shots. The weekend saw a similarly mismanaged mass vax event in Putnam County, a rural community about four hours north of St. Louis that had to put out an urgent call regardless of eligibility once it became clear its shots would go to waste otherwise. Could it be that Governor Mike Parson knows that the metropolitan areas by and large won’t vote for him, so he’s hoping we die? To be clear, we're not mad that rural populations are getting shots, but the fact that many St. Louisans — including people who are in the proper eligibility tiers — have to resort to piling into cars and driving hours round-trip to get a shot is enraging.

Eric Greitens, profile in courage: While there was plenty of coverage of Rudy Giuliani telling a gross story about the time he went golfing with Rush Limbaugh and the two ended up following a crew of paparazzi trying to take upskirt photos of a professional golfer, it was easily missed that Giuliani told this story while on the “Real America’s Voice” network with Steve Bannon and former Missouri Governor Eric Greitens. As Giuliani went full locker-room talk, Greitens could only grimace/smile. Greitens infamously resigned in 2018 amid revelations of adultery and accusations that he took nonconsensual pictures of a woman. Here he was handed a chance to meaningfully display how far he’d come from that controversy, finding himself in a position where a powerful man bragged about invading the dignity of a young woman — but Greitens could only look down, silent, and let Giuliani finish.

The birds that flew the coop: It’s been a full year since the debut of the Battlehawks, the ones that got away, stricken too soon by the viper-like strike of COVID-19. There’ll come a time to mourn everything lost in this lost year, but in the view of this Kaw-Kawlumn, the loss of our scrappy and extremely weird football team is a sting of what could have been, what might have flown. There's still some hope that the team will return, as a group of investors including Dwayne "the Rock" Johnson purchased the XFL over the summer with plans for a return to play in 2022, but we're still mourning the season that wasn't.

Josh Hawley overload: We’re getting sick of Josh Hawley, and we’re barely into the next hell-epoch. He’s at CPAC, he's being a total dingus at confirmation hearings, and he continues to represent himself as a monumental weasel when it comes to his opposition to certifying the voters for Biden’s victory on January 6. Hawley’s assertion that he wasn’t encouraging insurrection — but, instead, solely objecting to Pennsylvania not following its own laws — only makes sense until you check a map and realize that Pennsylvania is not part of Missouri. He is exhausting and honestly we wouldn’t mind if he went to Cancun for several hundred years.

Speaking of Rush: Rush Limbaugh is interred in a St. Louis cemetery, which would be bad enough, but his eternal presence lends further evidence of an unsavory trend in St. Louis harboring the spirits of profoundly stupid media personalities — and sure, Bob Romanik may not host “White Awareness Radio” anymore, but there’s still Jim Hoft and Gateway Pundit, an unrelenting fount of misinformation that Rush couldn’t match even at his most oxy-revved intensity. Moreover, given the non-zero possibility that we’re living through the apocalypse, we’re the ones who will have to man the unraptured barricades if the dead come back to life and an angry zombie army led by Rush Limbaugh bursts through the cemetery ground.