The Big Mad: Maskless Mania, Passing On Pujols and a Gun in Every Pot 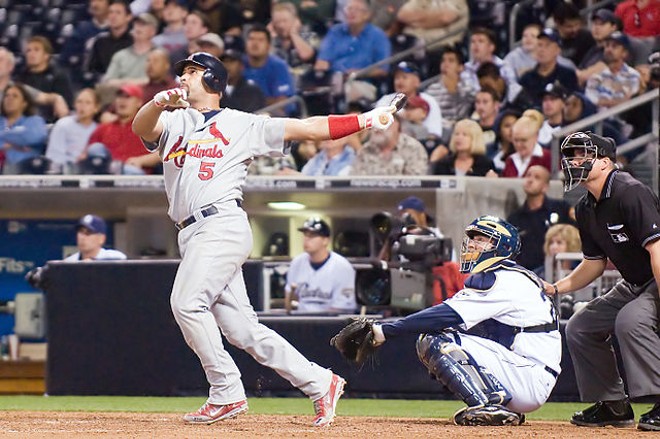 VIA WIKIMEDIA COMMONS / DJH57
Just imagine what could have been.

Money Talks: It would have been so much cheaper for St. Louis County, if only Robert Fernandez was a politician drumming up votes. Instead, Fernandez, a homeless panhandler, spent his time holding a sign near an Interstate 55 exit in south county — an occupation that, in a surprising windfall, brought him into conflict with the county’s anti-solicitation laws. As it turns out, the laws were so thuddingly unconstitutional that on May 11 a federal judge struck them down and awarded Fernandez $150,000 in damages. It was a victory for the little guy, but the absurdity of the victory is that the county could have gotten away with it if it hadn’t decided to get cute with the First Amendment: The county’s requirement for a “solicitation license” exempted politicians or non-monetary solicitors, leaving panhandlers like Fernandez with licenses that lasted three months and couldn’t be renewed. Police threw Fernandez in jail and cited and fined him dozens of times, all for the crime of holding a sign that read “Homeless. Anything Helps. God Bless.” While the judgment will hopefully change Fernandez’s life for the better, the county got here through inaction. Homelessness isn’t a crisis of litigation, but humanity. Fernandez’s case doesn’t solve the crisis, but, at the very least, it’s forced the county to update anti-vagrancy laws that haven’t changed since 1965. It’s not much, but it’s something. And anything helps.

Advice for Dicks: Hey, you, the guy who threw a full-on mask tantrum in Target while unironically insisting that, as an adult, you can make your own decisions, the CDC says you don’t have to cover your face anymore if you’re vaccinated. But guess what? Businesses get to decide if you can enter their shop, bar or restaurant without a mask. Places are doing that. They’re posting messages on their Instagram and Facebook pages pleading with you to be cool, because they’ve learned during the past year that you will be a dick to their employees. In fact, they’re betting that you’ll be even more of a dick now that the city and county have dropped mask mandates for vaccinated adults. Wait, we’re going to stop you right there — nobody cares if you’ve “got the antibodies” or whatever stupid shit you’re about to say. Just don’t be a dick if a business asks you to wear a mask. That’s it. Don’t be a dick.

Peanuts and Crackerjacks: It could have been so special. Here we were, excited at the prospect of having a fling with an ex, when Cardinals management decided to totally cockblock us. One Mr. Albert Pujols was officially let go by the Los Angeles Angels last week with just months left on the ten-year contract he signed when he became a free agent after the Cardinals won the 2011 World Series. Pujols could’ve come back to St. Louis, where the Cards are a “legit championship contender this season,” and he could’ve been the big baseball hero all over again. But no, that would have been too fun and cool, so he’s now with the Dodgers and is tasked with defending their win from last year. Don’t they know how beautiful it would have been? We could’ve been back in our Pujols jerseys, sipping on cold beers and pretending that it was still 2011 instead of stupid old 2021. Boo to all of this.

Guns Over People: In the GOP-dominated legislature, the Second Amendment is a mythic and semi-divine document, guns are an interior decorating flourish and domestic violence victims are an afterthought. How else to interpret the passage of a bill intended to “nullify” all federal gun regulations on May 14? The victory was celebrated by its sponsors with a press conference held around a pile of guns — but the same lawmakers ignored survivors of domestic violence who begged for a law that makes it illegal for people convicted of misdemeanor domestic violence to possess firearms. Such a prohibition was on the books until 2016, but it was erased that year as part of a bill expanding concealed carry rights, thereby creating a “domestic violence loophole” in the state’s gun laws. Five years later, the state Republicans have decided that, actually, domestic violence isn’t that bad. “If we say this misdemeanor, what misdemeanor is next?” asked Ron Hicks, the sponsor of the Second Amendment Preservation Act, as he defended the rights of people convicted of “criminal negligence by means of a deadly weapon or dangerous instrument” to possess a deadly weapon or dangerous instrument. Then there was Rick Brattin, who said he understood the desire to "to want to protect people,” but argued, with somewhat concerning specificity, that “in a real-world application, when tempers are flared,” a person could just have “a really bad night" and then get charged with domestic violence. Yeah. Now, thanks to these profiles in courage, convicted domestic abusers in Missouri still have the right to carry a gun on all nights, good and bad, going forward. Thank goodness the Missouri GOP is here to stand up for the real victims.