The Big Mad: Police Beatings, the Greitens Grift and a Farewell to the Big Stuck Boat 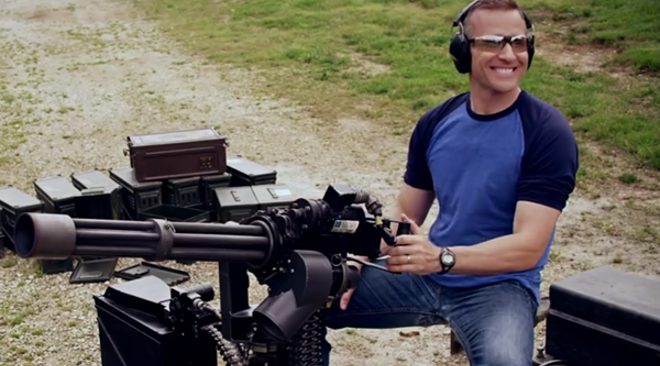 SCREENSHOT FROM THIS CLASSIC FILM
You just can't keep a good ex-governor who resigned in disgrace down.

Disgrace made for radio: Eric Greitens has launched his run for the U.S. Senate and with it an entire universe of bullshit which he attempted to feed Hugh Hewitt during a March 24 interview on the conservative columnist’s radio show. The interruption-laden interview reads like drinking nails and tastes worse: Greitens refused the very idea that the multiple investigations from the state legislature and witness testimony about his actions toward a hairdresser whom he tied up in his basement and allegedly photographed would be … bad, electorally speaking. But none of that actually happened, says Greitens, who resigned as governor in 2018 shortly after all that happened. On air, like the former president he is so desperate to emulate, Greitens threw out everything from George Soros to his own version of the words innocent people say after their criminal charges are dropped but before they resign as governor: “I have been fully exonerated.” Hewitt was reduced to whining, in between interruptions, that aaaaactually Greitens was only formally exonerated for one of his campaign finance violations — and, yeah, that’s fact-check true. But Greitens is lying, and doing it intentionally, even when he's doing it with a conservative radio host. Greitens started his gubernatorial campaign by appearing in ads where he shot a bunch of bullets at nothing. He’s doing it again, with bullshit instead of bullets — and the most enraging part is that it could very well work.

In two police beatings, courage and reluctance: During a hockey game on January 6, 1972, Blues defenseman Bobby Plager plunged into a crowd after watching a Philadelphia police officer crack his coach’s head open with a baton. Refusing to stand by, Plager delivered a shove to the cop, and the fight was on. Nearly 50 years later, Plager’s greatest fight in a career of great fights has a different tint to it. It’s not just that we’re remembering this story in the wake of Plager’s tragic death last week. We’re also thinking of a different story: the police beating of Luther Hall. This incident had nothing to do with hockey, and a lot do with what happens when people who see police abuse do nothing. As an undercover officer during a protest detail in 2017, Hall claims he was beaten and significantly injured by fellow officers who thought him a protester; and yet, as trial commenced, few cops came to his aid in court. A federal prosecutor even noted the “parade of reluctant police officers” who had to be compelled to testify. Conversely, there was none of that reluctance in 1972 — and Plager wasn’t even an officer, just a hockey player who couldn’t play it safe while a cop beat an innocent man. Plager wasn’t reluctant to do the right thing, even if it was dangerous and risky. Today, it’s too often a stand cops aren’t willing to take — even when it’s their own teammate being beaten.

Rent out-of-control: The real estate market has been on fire lately, and while that’s nice for homeowners, it’s tough times for the rest of us poor saps. As landlords sell off their investment properties while the gettin’ is good, rental options have decreased dramatically, and what’s left is fetching a pretty penny. Famously affordable St. Louis is not immune — according to a January report, rent in the Gateway City is up 22 percent in 2021 when compared to 2020. There are currently thousands of houses for sale in St. Louis, and the rent on the few remaining properties is sky-high — wild to see in a town that is known for its low cost of living. Recent real estate listings show apartments in eight-family complexes that would’ve rented for $800 per month (maximum) just a few years ago going for upwards of $1,400 per month. If you’re looking for a new place to live and you see somewhere that will work for you, jump on it immediately. If not, it will be gone tomorrow — it’s a dog-eat-dog market and only the quickest (and the richest) are coming out winners.

Raising all ships: Everyone is rejoicing that the Big Stuck Boat is now unstuck, but this false catharsis couldn’t have come at a worse time. Wedged into the side of the Suez Canal, the Ever Given became a beautiful catastrophe, a physical crisis that overwhelmed by sheer size the crises hovering at the edges of our minds — how could you think about virus mutations, vaccine spoilage or climate change when there like a colossus sat a boat so big and so stuck that it caused our world to grind to a halt? It was the bigness that healed us: It broke our regular-sized sense for scale and proportion, and everything seemed just a little bit smaller, more manageable, as long as we knew a boat longer than Busch Stadium was being daintily bonked by a tiny army of humans and their construction vehicles. Now that it’s gone, all we have left are the photos — and a boat-shaped space in our hearts.