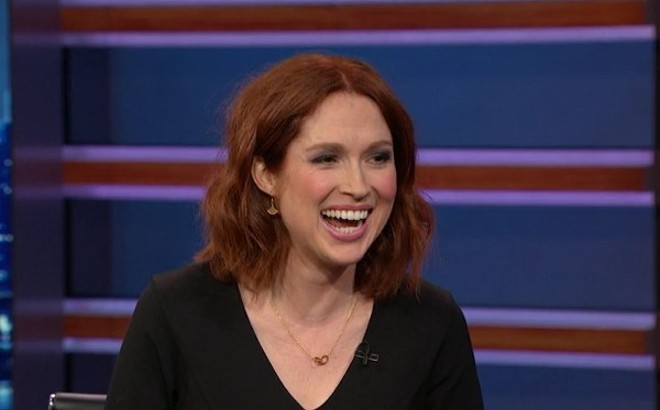 SCREENSHOT FROM THIS VIDEO
Actress and St. Louis native Ellie Kemper issued an apology this week for her role in the 1999 Veiled Prophet Ball.

Welcome back to the Big Mad, the RFT’s weekly roundup of righteous rage! Because we know your time is short and your anger is white-hot:

Ellie Kemper Unveiled: The Veiled Prophet can’t hide what it is, and, to Ellie Kemper’s credit, she didn’t try to defend its “unquestionably racist, sexist, and elitist past,” as those were the exact words she used to describe the group in a June 7 Instagram post. It was her first public comment addressing her participation in what she had believed, as a nineteen-year-old in 1999, was just a “debutante ball” in her hometown of St. Louis. “I wasn't aware of this history at the time,” she said, “but ignorance is no excuse. I was old enough to have educated myself before getting involved.” Kemper directed her apology “to the people I’ve disappointed” and vowed to “use my privilege in support of the better society I think we’re capable of becoming.” Hours later, the Veiled Prophet Organization finally released its own apology for “the actions and images from our history,” adding “our hope is that moving forward, the community sees us for who we are today.” The statement is a significant step, but where was this public reckoning years ago? Why did it take a decade of protests before it accepted Black and Jewish members in 1978? It has no excuse for the silence. It has no excuse, as well, for its failure to speak out as Kemper became the unfair symbol — a “KKK princess,” as some on Twitter dubbed her — of the group’s 140-year-old history. In a gross way, it’s fitting: In 1999, Kemper smiled and waved as she was introduced as the Veiled Prophet’s 105th “Queen of Love and Beauty,” while next to her, a man from St. Louis’ elite, the Veiled Prophet himself, was safely hidden. Maybe, finally, the veil can start slipping for good.

Sail Away Tod: For more than five years, Tod Robberson has been doing a tiresome but absolutely dedicated bit as a hopelessly out-of-touch editorial page editor dropped into a Midwestern city. (We thought the “sailor, tennis player” description in his Twitter bio was a little too on the nose, but sometimes you have to hit the audience over the head when building themes.) And while you have to admire the work of a performer who has doggedly refused to break character for a half-decade, it seemed the joke had run its course. So we weren’t Big Mad to read the first part of a recent column announcing he was moving away. We skimmed through the humblebrag tour of his career, figuring this would at least be the last time we had to witness this J. Peterman knockoff routine. And then he hit us with the twist: He’s going to telecommute half the time from West Hartford, Connecticut, and rent an apartment in St. Louis. Damnit, Tod, of course you are! We’re not even mad at you. We just hate ourselves for not anticipating such an obvious plot point. By the time he added that the Connecticut house was nearly 300 years old, “has its own Wikipedia page and is on the National Register of Historic Places,” we were so thoroughly embarrassed for not seeing this coming that we could only walk into the Sea of St. Louis and hope to be run over by his schooner.

To Self-Serve and Project: As with many of his GOP colleagues, State Rep. Nick Schroer presents as a fervent backer of licking every police boot he can put near a podium — but in St. Louis City, Schroer wants the boot to lick him. On June 2, Schroer, who represents parts of St. Charles and O’Fallon, called for a special legislative session so he can try and assert state control over the St. Louis Metropolitan Police Department. Schroer, casting himself in the hero role, accused Mayor Tishaura Jones of trying to “defund police” — though her plan would move only a small portion of the department’s total budget in order to fund expanded community services and non-police forms of crime prevention. On its face, Schroer’s press conference was an egregious photo-op: Schroer got to be the center of the show, threatening city Circuit Attorney Kim Gardner that he would “push for the state to take back control of the St. Louis Metropolitan Police Department” if she doesn’t prosecute more criminals. The optics were revealing, as the event featured five white GOP legislators from surrounding counties. Not a single member of the city’s government or police were invited — but then again, why would they be? For Schroer, actually visiting St. Louis neighborhoods or talking to its leaders would imply that improving a place’s policing takes, well, understanding its people and geography. It’s much easier to show up unannounced, trash the city, and hoof it back to St. Charles without breaking a sweat.