The Big Mad: Ventilator Blues, Buffing the Bluffs and Parson's War on Cops 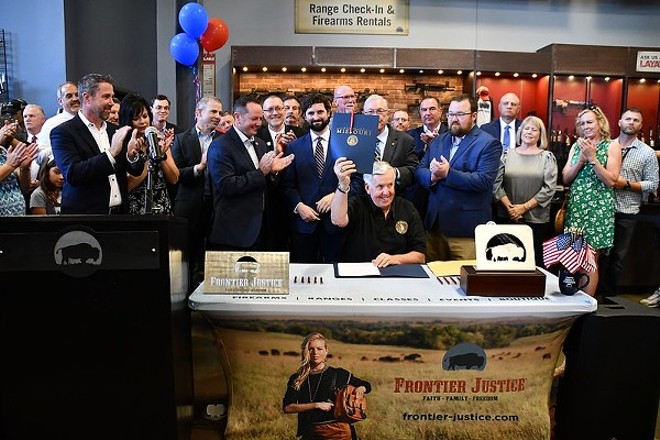 Welcome back to the Big Mad, the RFT's weekly roundup of righteous rage! Because we know your time is short and your anger is hot:

Kids These Days: Not a day goes by that we don’t ask ourselves what in the heck is wrong with people. This week, our ire is pointed at the idiots that sprayed graffiti on a limestone bluff at Hickory Canyons Conservation Area in Ste. Genevieve County, forcing Missouri Department of Conservation staffers to grind down the limestone to remove it and try to restore the natural beauty of the place. To the people with the spray paint: What the heck is wrong with you? Since you just sprayed your names and dumb smiley faces, we’re assuming that you’re stupid kids and not professional artists. And as stupid kids, you should know that it’s much cooler to spray paint goverment buildings. We’re not saying don’t tag anything anywhere, we’re saying that you should be more strategic with your vandalism! You go out into nature to get high, not to tag shit! Keep the tagging in the city, keep the weed in the woods. Didn’t your parents teach you anything?

Hearts of Stone: Really, would it have been so fucking hard to wear your mask at the Rolling Stones concert at the Dome at America’s Center? We’re almost two years into this thing and you’re still being pissy little babies about masks? Every photo from the event showed a sea of maskless people with just a few non-idiots sprinkled in with their faces covered. The hospitals are full, the nurses are at the end of their ropes, the vaccine isn’t infallible, yet still, you won’t make even basic moves to protect yourselves or those around you. Some 688,000 people have died from COVID in this country, and at the rate we’re going we’ll see hundreds of thousands more slowly suffocate to death because nobody is willing to face reality. To quote the Stones: “Ain't nobody slowing down, no way / Everybody's stepping on their accelerator / Don't matter where you are / Everybody's gonna need a ventilator.”

Jimmy Kimmel Defense Squad: Jimmy Kimmel caused quite the stir in St. Louis this week when he went up against Imo’s Pizza’s No. 1 fan, Simone Biles, over the infamous ‘za. On his show, he told Biles the pizza was “very, very bad,” leading the gymnast to challenge him to combat over his opinion. But in defense of Kimmel, we’d like to emphasize the very fact that St. Louis itself is split over our pizza. Depending on who you ask, you either get the “cracker with cheese” mentality or immediately pointed to a shrine dedicated to the Provel gods. With a wife from St. Louis who loves the pizza while the Brooklyn native says it tastes like melted plastic, he represents a very real split. St. Louis was quick to throw Kimmel under the bus for his thoughts on our culinary proclivities, but we all should be praising him for his bold stance. Standing up to Biles is no feat. She’s proven herself time and time again as a strong woman, going up against predators like Larry Nassar, and as an undefeatable gymnast who knows when to take a break. And while Kimmel will never be widely beloved by St. Louisans in the way Biles is, maybe we all should take a second to recognize the tenacity of Kimmel to go against a city as passionate as St. Louis. That takes some serious balls. We respect it.

Quick on the Flaw: Governor Mike Parson is apparently having second thoughts about Missouri’s publicity stunt gun rights law now that the cluster it has caused is too obvious to ignore. In June, Parson signed the Second Amendment Preservation Act at a gun shop called Frontier Justice, grinning like he’d just won a lifetime supply of Werther’s Original candies. “This legislation today draws a line in the sand and demonstrates our commitment to reject any attempt by the federal government to circumvent the fundamental right Missourians have to keep and bear arms to protect themselves and their property,” he said at the time. But guess what? Cops hate it. Parson was so eager to own the libs that he and Republican legislators ignored police chiefs across the state who warned the $50,000 penalty for anyone caught helping enforce federal gun laws would make all those federal task forces they count on unworkable. KMOV was the latest to point this out, and Parson admitted to them the law needed to be revisited so they could “move forward on this, without causing problems for local law enforcement or the federal agency.” Parson meant the law to be a message to President Joe Biden, KMOV reports, which tracks with the governor’s “line in the sand” machismo. But the weird thing about treating laws like press releases is that laws stay laws, with actual consequences that outlast the headlines.