The Blues' Best Weekend Ever 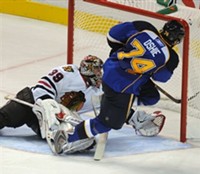 At the start of the weekend, the Blues were one of the chasers, a team on the outside looking in. Now, we get to see just how well they can play while being chased. After beating the Columbus Blue Jackets twice in less than 24 hours, the Blues are, as of right now, the final playoff team in the Western Conference.

Hang on, let me say that again. The Blues are the final playoff team in the West. It just feels good to say, you know?

I have to say, that was an all-time great performance over the weekend by a Blues team that suddenly looks to have found a pretty serious second wind. The trio of Oshie, Berglund, and Perron represents the single hottest line combo in the NHL right now, and Chris Mason continues to be just lights out. Even with a rather lackluster stretch a couple of weeks back, they've continued winning, piling up points and gaining ground.
What's most encouraging now is that the scoring appears to have come back in a big way. The last three games, the Blues have scored thirteen, after totaling the same number in the previous six contests.
That scoring boost has come almost entirely from the youngsters, as David Backes has twelve points in as many games to go along with the performances of the three-headed monster of Oshie, Berglund, and Perron.
Of course, now comes the biggest test for this team. They're no longer the underdog, no longer the outsiders trying to crash the party. The Blues have the playoff spot, with six games to go. Of those six games, only one will be played in the Scottrade Center. They play both Chicago and Detroit. In other words, if there were a way to set up the schedule worse for the Blues to try and hold on to their spot, I don't know exactly what it would be.
Still, as of right now, the Blues are in, and that's something I never, ever thought I would be saying about this team a couple of months ago.