The Blues Have a Not-So-Secret Weapon: Boobs 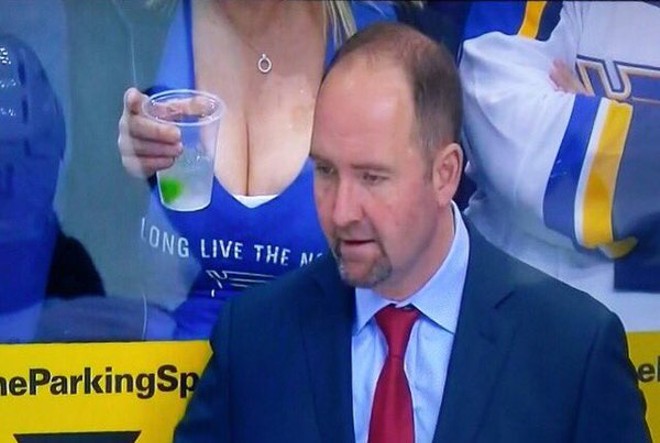 via Twitter
You might want to look behind you, buddy...
Update: The woman behind the #RallyBoobs, Emily Rothschild, has turned her bosom's popularity into a force for good — she and her husband are now raising money to fight breast cancer. See our follow-up coverage here.

The St. Louis Blues are presently engaged in a fierce playoff battle. It is a magnificent confrontation of power and skill, checking and passing, one bearded skating guy whaling the shit out of another bearded skating guy— but into this battlefield comes a new warrior.

Or rather, two warriors.

Indeed, the past several Blues games have featured some pretty amazing cleavage prominently positioned behind the opposing team's bench. While it's impossible to say whether the bosoms in question actually affected the outcomes of the games, viewers and fans certainly took note.

The local obsessing began after this woman showed up during the Blues' Game 7 victory against the Chicago Blackhawks on April 25. Although the woman appeared to be wearing a Blackhawks jersey, some wondered if her location behind the Chicago bench hinted at more nefarious motivations.

But when the Blues took on the Dallas Stars, a different female fan took the spotlight. And there was no doubt where her loyalties lay.


The owner of those Zambonis, it turns out, knew exactly what she was doing.

After the May 3 game, the woman's husband informed the fan blog Busted Coverage (yes, really) that the Blues hadn't planted the boobs as a form of psychological warfare — his wife simply loves supporting the team, by any means necessary.

On Sunday, the same woman (wearing the same "Long Live the Note" shirt) turned up during Game 1 of the series against the San Jose Sharks. Again, she was sitting right behind the opposing team's bench, and she managed to make #RallyBoobs into a trending topic on Twitter.

Our cup size is Stanley. pic.twitter.com/CTVomMoCa6


Even opposing fans had to give her props.

The only good thing about last night's Sharks loss was the Blues fan sitting behind the Sharks bench. #BluesBoobs pic.twitter.com/Y9QjKF0lP1


Just goes to show — joining the Blues bandwagon has its benefits.

See also: The Beginner’s Guide to the Blues Bandwagon