The Blues Through Two: Woo! 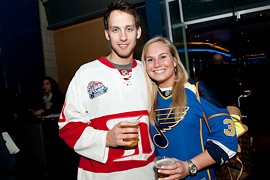 I'm including this picture just to remind everyone there are those who are less fortunate. God, that poor, poor woman.
The St. Louis Blues have played exactly two games this season, which is more than enough for me to say this, without equivocation: The 2013 St. Louis Blues are the greatest hockey team in the history of having a history of hockey teams.
No, no. Don't argue with me. You can't. After the shellacking of Detroit on Opening Night, it was pretty much already a fait accompli that this team would go down as the greatest of all time (hereafter referred to as, the GOAT), but their win last night over Nashville, in Nashville, facing the Sith Lord of goaliedom Pekka Rinne, just cemented it.
The only question now, really, is: best hockey team ever? Or best team ever? The '27 Yankees and the A-Team both have respectable claims of their own, but I just don't see how they can stand against the unstoppable juggernaut that plays at the Scottrade Center this year.
Okay, first things first, I have to get this out of the way: Vladimir Tarasenko. Holy shit. I think that pretty much sums it up, right?
We all knew going in that Tarasenko was an exciting player; we've heard the hype and the rumors enough to be intrigued. But to see the kid come out of the gate like this, firing on all cylinders (and appearing to have at least a couple more cylinders than most players in general), is just...wow. That's the only word for it. Wow.
I didn't realize, for instance, just how fast the guy is. Or how fast. Actually, how FASt. Capital F, capital A, capital S. Lowercase T, though. You know, just because. Going on the bits and pieces of video here and there, I had some inkling of Tarasenko's skill, but actually seeing him out there on the ice up close and in person, it's startling to see how much space he's able to cover and how quickly. Five points overall in two games, including a pair of goals on Opening Night that were almost too pretty. The kid may be setting himself up for disappointment down the road; after all, at some point he's probably going to have a game in which he doesn't look like a future Hall of Famer. I just hope, when that day comes, the fans will be forgiving.
I don't want this whole piece to be the Tarasenko Show; the rest of the team has looked remarkably good so far as well. But, well, it's hard not to let a performance like that of the Blues' newest import take over things a little.
Still, can I tell you how exciting it was to see Chris Stewart play well his first night out? The enigmatic forward has shown it in the past, and he's going to need to play more than one of those games to convince me it isn't the same old Stewart, but I have to admit he looked fast, and fit, and focused out there, three Fs we haven't always been able to apply to him.
And, hey, T.J. Oshie's goal in the shootout last night? Positively bonerific, if you'll allow me to say so. (Or even if you don't; it's my embarrassing physical issue, after all.) Oh, and hey, how about Alex Pietrangelo with three points through his first two outings of the year? Probably deserves a mention, right? Even if I didn't get around to it until the last third of the article.
Opening Night, we saw everything go right for the Blues, and just how dynamic this team can be. The defense and goaltending were outstanding, and the revamped offense looked incredible. Last night we saw the reverse, a gritty comeback on the road against a brutally tough Predator team that may be the most physical squad the Blues will play all season.
Tonight, we'll get to see the final piece of the puzzle: how this team will react to the 2013 schedule. The condensed season is going to necessitate some things we've rarely, if ever, seen before in the NHL; the Blues have ten instances of games on back to back nights this year. (And remember, that's in the space of just 48 games.) Don't get me wrong; we aren't going to fully understand just what this schedule does to players, and teams, until the real grind sets in, when March starts to roll in and the days off seem fewer and further between than ever before. But right now, as these teams try to get fully into the swing of playing at NHL speed, the first back to back of 2013 could tell us quite a bit about this team.
So far, so, so good. Maybe this team isn't really the best ever. They may not even be the best team in the NHL this season; I haven't honestly seen but about four teams play at all so far. But, I also haven't seen anything yet to suggest this team isn't every bit as talented, and dynamic, and exciting as we hoped. And that's a pretty great feeling to start the season.