The Brewers Shoot First in Effort to Stay Atop NL Central 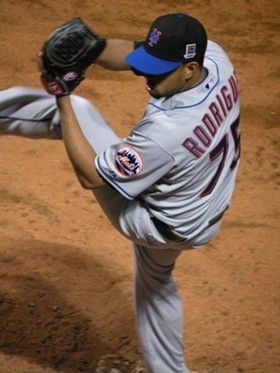 commons.wikimedia.org
The Milwaukee Brewers fired the opening salvo this week in the trade deadline skirmish to win the NL Central, and they struck a pretty good blow.
On Tuesdays the Brewers acquired Francisco Rodriguez (that's "K-Rod" owing to his ability to get strikeouts, though "F-Rod" would be a much more fun nickname), from the New York Mets, along with cash considerations, in exchange for a pair of players to be named later.
My first thought upon reading this news was, "What? The Mets have cash? Did they get a card from a relative with twenty bucks in it for their birthday or something?" My second thought was, "Huh, that seems a little odd. The Brewers already have a closer. Pretty good one, too." And then my third thought was, "Actually, this could be bad news for the Cardinals."
So just how much of difference will K-Rod make the rest of the season? Well, in terms of actual value added, not that much. Go look up the WAR (wins above replacement), of the top relief arms in all of baseball, and you'll see relievers just don't really count for a huge amount of value overall. So the upgrade from the Brew Crew's current setup crew to some combination of John Axford and Rodriguez will probably be worth at best a win or so on paper.
Of course, we all know WAR doesn't do a great job of valuing relievers anyway, at least in terms of potential team wins. How many actual wins this could add to the Brewers' total is anyone's guess.

I will say this, though: if the Milwaukee had one real weakness, it was their bullpen. Axford has been solid closing games, but the rest of the relief corps has been shaky, to put it lightly. The Brewers lead all of baseball in relief losses, and their bullpen ranks in the bottom half of the National League in pretty much every significant category. Adding an arm like K-Rod's to the mix represents, to me at least, is a very worrisome proposition.
Equally worrisome is the specter of the Cards now making a knee-jerk trade to try and keep pace with the Brewers. That's not to say they shouldn't try to upgrade the team in any way possible, of course, but I'm worried the simplest answer to a division rival picking up an expensive closer in his walk year would be to pick up an expensive closer in his walk year, i.e. Heath Bell.
There is one very interesting side note in all of this, and it has to do with Rodriguez's contract. He has a $17.5 million option for 2012 which automatically vests if he finishes 55 games. Not saves, finishes. So far this season he has finished 34 games. I can't imagine Milwaukee wants anything to do with paying a reliever close to 20 million bucks next year, so I would assume he'll be pitching primarily in a setup role. The only problem with that is K-Rod has made it very clear in the past he has no interest in setup work. How the Brewers handle a potentially disgruntled K-Rod could be very interesting if they hold him out of finishing games to try and avoid his option vesting.
So does this make the Brewers the favourites to win the division? Short answer: probably. Then again, you could have easily made the case they were the favourites before, and while this move does improve them a bit, it isn't the sort of deal which is going to significantly alter the balance of power in the division.